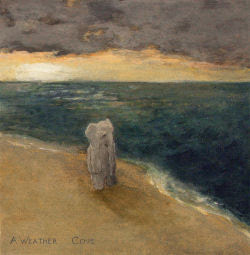 >> To quote Wikipedia, "Lovers rock is a style of reggae music noted for its romantic sound and content. The style originated in South London in the mid 1970s." But if the tag hadn't already been bestowed some 35 years ago, it would certainly be a ready characterization of the understated sounds of Portland, Ore.-based A Weather. The band's beautiful full-length debut has a persistent but slippery allure. Populated almost entirely with murmured bedroom ballads driven by brushed drums, guitar and electric piano, the set somehow succeeds in not repeating the same tricks over and over again. Team Love releases Cove March 4. It's the first big surprise of 2008.

Is there a voyeuristic attraction inherent in pretty songs delivered in hushed tones simultaneously by male and female singers? Or is there something universal -- an inverse of voyeurism, in a way -- conveyed by these intimate, poignant tracks that make them so arresting. What we are certain of is that sping-tingling moments are frequent on Cove: when the ride cymbal pulses louder and louder during "Shirley Road Shirley" as fronter Aaron Gerber and drummer Sarah Winchester desperately assure "I swear, you won't even know I'm there;" when the duo stingingly confesses during "Oh My Stars" that "sometimes it's hard thinking about how the plans we make won't happen;" when the pair utters during "Spiders, Snakes" the unfathomably sweet sentiment (for those of us of a certain age, anyway) "I want to have you again, listening to Bedhead." According to A Weather's MySpace fort the band is slated to perform six times between now and the first week of May, and we've posted the dates below (we can't imagine a full tour is not forthcoming later in the year). We previously posted the excellent tracks "Spiders, Snakes" and "Oh My Stars" here last month, so we're offering "Screw Up Your Courage" below, although it is our least favorite song on a record filled with great numbers.

A Weather -- "Screw Up Your Courage" -- Cove
[right click and save as]
[pre-order Cove via Saddle Creek right here for shipment Feb. 19]

Email ThisBlogThis!Share to TwitterShare to FacebookShare to Pinterest
Labels: A Weather, Bedhead