You Know That One Band We Really Like, Johnny Foreigner? Johnny Foreigner will headline a tour of the UK in October to celebrate the release of their sophomore full-length Grace And The Bigger Picture, an album that we expect will be our favorite of the year (although it already has stiff competition in the form of Projekt A-ko's absurdly perfect Yoyodyne). Grace And The Bigger Picture will be released 26 October in the UK on Best Before Records. It is preceded 12 October by a second single from the set, "Criminals," whose tiny cover art you can see here. The first single, "Feels Like Summer," was released to the Internet for free last month.
Posted by Unknown at 7/27/2009 06:53:00 AM 0 comments 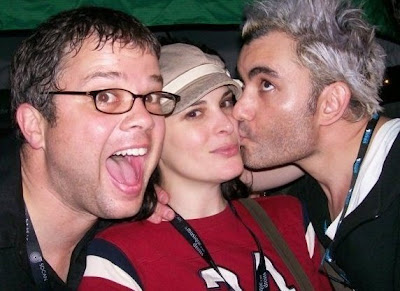 Northampton, Mass.'s Winterpills held the second slot, the first we witnessed upon making the scene. The band's self-titled debut from 2005 holds several songs that we enjoy, but we've never been fully into the band's lighter, folksier fare. Friday's performance didn't change that, but we were pleased to hear the quintet -- which struggled with a recalcitrant keyboard and ended up re-working its set -- play the up-tempo strummer "Laughing." Our hopes of hearing "Threshing Machine" were not met, but regardless Winterpills are charming on stage and we still enjoy their peppier stuff. -- Jay Breitling
Posted by Unknown at 7/26/2009 09:21:00 AM 0 comments Email ThisBlogThis!Share to TwitterShare to FacebookShare to Pinterest
Links to this post
Labels: Evan Dando, The Lemonheads, Varsity Drag

Rock Over Boston: Megafaun, Future Of The Left [PHOTO CREDIT: Michael Piantigini, used with permission] The lead track from Gather, Form and Fly (Hometapes), the sophomore album to be released next Tuesday by former Bon Iver partners Megafaun (Bon Iver + Megafaun = DeYarmond Edison) is "The Fade," a perfect three-part harmony summer pop song in the CSN tradition, but a closer reading of the lyric, and of Megafaun, reveals so much more.

The North Carolina-based trio's starting point is indeed a very traditional one: Southern roots and Appalachia –- banjos, acoustic guitars, fiddles, and gorgeous three-part harmonies (did I mention the harmonies?), but they sometimes have a tendency to take all that and run it through beat-up tape machines or samplers, or put a layer of noise over it, or let a song disintegrate entirely into a five-minute drone. Just to warp it a bit and make it all entirely modern. Megafaun's last couple of trips through town found them sharing a bill at the Middle East with the minimalist Arnold Dreyblatt and before that at the the Lily Pad with electronic musician Greg Davis, so that should give you an idea of the breadth of their influences.

So, yeah, they do sometimes have a tendency to set up jaunty sing-along melodies like the one in the new album’s "Darkest Hour," only to annihilate it utterly not only with its dark lyric, but with buzzing loops of rain, chimes, noise, crude electronic samples of the melody. But gentle meditations like "Worried Mind," demonstrate that Megafaun doesn’t overdo it.

The threesome's first album, Bury the Square, had all of these elements, too (and is recommended also), but Gather, Form and Fly is an ambitious expansion and advancement. There are a couple of moments that don’t entirely work for me, like the Caribbean drums on "Columns," but with Megafaun, it feels like it's all part of the process.

Explaining their sound, though, almost seems to undermine a description of their spirit. Their live shows, including this past Sunday's stop on their tour with Bowerbirds, feel like a celebration or an affirmation of music at its best: the live music show as congregation. They can work a crowd -– getting us involved in singing along, or handing out percussion, or just so genuinely enjoying what they do. Megafaun has been on my must-see list since I stumbled across them at SXSW a couple of years ago -– add them to yours.

And while you are adding bands to see to your lists, here’s an entirely different one to add. Make sure you head to TT’s this Friday night to see ex-Mclusky-ers Future of the Left, who are supporting their new one Travels With Myself And Another [Mclusky's "Light Sabre Cock Sucking Blues" ranks very, very high on Clicky Clicky Music Blog's patent-pending Spicoli/Sneaker Rockness Axis. -- Ed.]. I confess to not really getting it when I heard their first album, Curses!, but seeing them live did the trick. This is truly the great live rock where it has that hint of danger –- it feels like anything could happen. Be there. -– Michael Piantigini