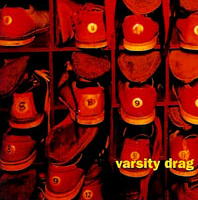 You know what's great? Former Lemonhead Ben Deily's latest band Varsity Drag. The UK Lemonheads page pointed us over to the band's minty fresh, three-days-old MySpace page where there is the usual quartet of tracks streaming -- and available for download. The quintet, which features Deily on vocals and guitar, just released a nine-track punk-pop workout titled For Crying Out Loud. We loves The Dand, fer sher, but the majority of our favorite pre-Atlantic Lemonheads cuts were sung by Deily, you know, like "Ever" and "Anyway."

Well, all the Varsity Drag tracks have that same vibe, and if you're a fan of Deily's Lemonheads stuff, you'll like this. We never listened to Deily and his brother's post-Lemonheads project PODS, we should try to dig some of that stuff up. Here's an interesting tidbit from Deily's web site: Apparently he hasn't seen any royalties from Taang for about ten years, even though the 'Heads Taang catalog still moves units. We just bought a copy of Hate Your Friends last month. Anyway, here are some links to the MP3s posted at Varsity Drag's MySpace drive-thru. We recommend "Skinny Ties" and "Summertime":