YouTube Rodeo: The Beatings' "All The Things You've Been Missing"


Standout track from the band's stellar 2009 full-length Late Season Kids, which we lauded here. Back then we said of the tune, "[t]he redemptive caterwaul of co-fronter E.R. drives the album highlight "All The Things You've Been Missing" repeatedly into a chorus built on a scalding baptism of blaring, reverbed guitars. At the break-down he spits lines that recall Lloyd Dobbler dialogue, before spinning the song on its side like a bottle cap into a jabbing, acerbic coda." This new video was filmed in late 2010, and local denizens will recognize the stately environs of O'Brien's Pub as one of the settings. The clip is pretty straightforward in an early '80s MTV kinda vein, but the camera work gets more exciting as the song whips itself through terraced crescendos; in a way the best thing the cinematographer can do (and does) is get out of the way while The Beatings tear open a can of musical whomp-ass. Buy Late Season Kids from Midriff Records right here.
Posted by Unknown at 2/28/2011 10:57:00 PM 0 comments

Email ThisBlogThis!Share to TwitterShare to FacebookShare to Pinterest
Labels: E.R., The Beatings


Devastatingly catchy second single from the Manchester, England-based quartet's sophomore set of the same name, Lifeline. Buy the record directly from the band right here. Handwritten lyrics and streams from many album tracks from the new joint are posted at The Answering Machine's web site right here. Glad to see "Romantic And Square" has returned, the demo has been a favorite even since we ripped it from MySpace a few years back. Here's the embed of "Lifeline" from Bandcamp. 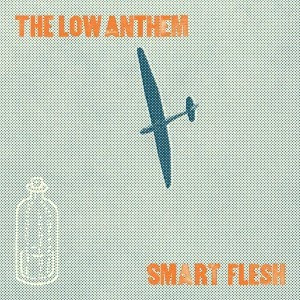 The Low Anthem have threaded a high wire throughout their new album Smart Flesh (Nonesuch), and they traverse it with a solemn grace.

The politics of war and empty suits ("Hey All You Hippies") and love and guilt ("I'll Take Out Your Ashes") conspire with the album's direct and oblique, references to high wire walking - and specifically to Phillipe Petit, and his 1974 walk between the in-construction World Trade Center towers (documented beautifully in the 2008 film Man On Wire) - to conjure a wrenching mix of inspiration, bygone eras, vague menace, and resulting sadness. The lynchpin is the exhilarating "Boeing 737," which demands your attention early on an album otherwise filled with a stillness and meditation.

There's welcome trend in the pop music these days of bands moving beyond electric guitars and electronic gizmos (hey, one of those bands just won a Grammy, even!) and broadening their sounds with more variety of traditional instruments. The Low Anthem do this in a way that feels more organic to me than most of these other bands. I love that breathing field organ and Jocie Adams' clarinet and singing saw.

This is presumably what WNYC's Soundcheck host Jack Shaefer was referring to in this past Sunday's New York Times feature on the band, because there's no theremin on this album. I suppose that a singing saw might be a sort of unplugged theremin, though, and his larger point about The Low Anthem messing with our expectations is certainly well-taken. Boilerplate Americana on paper, they've crafted a unique voice. There's a certainly a Southern rural undercurrent, but it's heavily overlayed by a despairing Northern (or rust belt?) post-industrial, post-9/11, post-financial collapse malaise. It creates a reflection of a recurrent America in a timeless template. That most of it was recorded in the former spaghetti sauce factory formerly owned by Providence, Rhode Island's convicted felon mayor is almost too perfect.

I've talked before of how magical their performances can be. I still regret not being able to see them in one of the church venues at SXSW a couple of years ago that was reportedly transcendent, but I have another chance! As they headline Boston's Old South Church on Friday, March 4th [tickets] with original member Daniel Lefkowitz and Vermont's Bobby (a difficult-to-Google band name, but I found 'em). The tour opener from a Washington, DC synagogue will be broadcast live on NPR and should prove to be a good preview. Oh, man do we ever need Asheville-based garage rock revivalists triumphalists Reigning Sound to hit town more frequently, if only to remind us of how much you can do with three chords (occasionally four - on the complicated songs).

Frontman Greg Cartwright (late of Memphis icons the Oblivians) delivers his classic 50's and 60's rock and roll/soul/R&B songcraft without an ounce of bullshit: a Gretsch, plugged straight in, some great melodies, and one of those great, lived-in rock voices. The songs are models of economy - three minute gems that make their point and move on. Nothing overstays its welcome, proving the maxims about how much punk has in common with early rock and roll.

Thursday night at the cozy Brighton outpost Magic Room Gallery, we simply got one great song after another, delivered with punk rock efficiency. No messing around. Cartwright gives a mild-mannered first impression, but, once things start heating up on stage, he is a man possessed by his songs. His head shaking, enunciation breaking, chords slashing.

They drew mostly on their last couple of albums with nuggets here and there that sound so classic that you scratch your head wondering if they're playing a new one, a track you missed, or a cover of some lost 60's 7-incher that they found crate-digging at their local record shop. Either way, they're sharing a form of heaven.

[Two days later, they played a fundraiser for WFMU at Hoboken's Maxwell's, all of which was broadcast on the great Saturday staple, The Cherry Blossom Clinic with DJ Terre T. You can hear the archive here.]

We only got to the show in time to hear Casey Desmond's The Woods Colt play their closing cover of Talking Heads' "Road To Nowhere" from the lobby, but we really dug duo The Human Tail's twisted, effected-guitar blues grind. Their Soundcloud page = bookmarked.

This Saturday in Somerville: Varsity Drag 
The Best Show on WFMU's Tom Scharpling follows up his hilarious video for Ted Leo's "Bottled In Cork" from last year with an equally hysterical one for The New Pornographers' "Move" from 2010's Clicky Clicky Top 10 entry, Together. Superb casting!