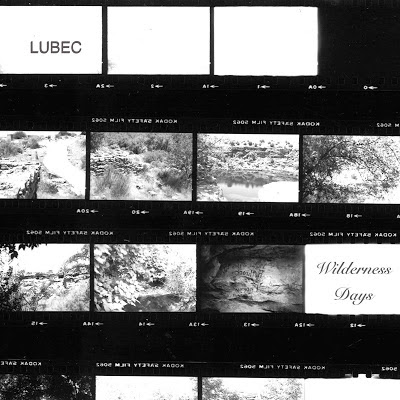 Around the time of the release of Lubec's brilliant EP Nothing Is Enough! we heralded the noise-pop act's music as "the definition of epic new dream pop." And while our excitement about the band is more fervent than ever, we think that assessment falls short in one respect: it doesn't convey that the Portland, Ore.-based quartet's music also communicates a charming, classic, early pop innocence. So, "epic" in scope and "new" in terms of, well, newness, yes. But the music is also rooted in and respectfully acknowledges a tradition encompassing Motown, The Modern Lovers and even Lubec fronter Eddie Charlton's beloved Lilys. This is all made more apparent on Lubec's brilliant forthcoming compilation LP Wilderness Days.

Like a Shakespearean mise en abyme, Wilderness Days contains all of Nothing Is Enough! alongside six additional recordings sequenced into a compelling whole. The full-length is intended to capture and contextualize most if not all of Lubec's early work as the band -- which began in Virginia but has reformulated on the west coast -- prepares what it considers a proper first full-length, which it is currently recording. That said, there is nothing in this collection that can be characterized as "improper;" Wilderness Days feels like a single collection of music, not a pastiche. As we've quipped elsewhere, there's only one way Lubec could have improved on Nothing Is Enough!, and that would be to make it longer. Wilderness Days, which features four previously unreleased tracks in addition to the six from the EP (free download here, incidentally), the 2009 teaser track "Gang Knife Battles" and the limited-edition vinyl single "You're A Good Idea (Theme From Lubec)," in effect does just that.

The title track is one of those previously unreleased tunes, and it is massive. The song is built up from a foundation of tremeloed guitar chords and sparkling piano accents to a shuddering, beautiful chorus. The lyric in the verse is the most tender and delicate Mr. Charlton has uttered, then the pre-chorus thunders. It's vaguely shocking that the band has held this song back as long as it has, as it makes perhaps the most compelling statement for Charlton's "sculpt-rock" vision (basically: big guitars + big melodies + adventurous sonic frequency equalizations) as any other track, even the kinetic, guitar-smeared roller-rink stomper "Your Magic Wand" from the EP or "Gang Knife Battles." Because of delays relating to pressing the vinyl, the release date for Wilderness Days has kept moving further away, like a mirage. But at least some fans recently received the "You're A Good Idea" vinyl single, which we've been told would be a harbinger for the shipping of the LP. Pre-orders are still being taken, however, and Wilderness Days is being released in a limited edition of 300 pieces packaged with poetry, sheet music and "clothing and accessories." Get in on the action before there is no longer any action to get in on, is what we'd advise, as we expect demand for the band's music is only going to increase.