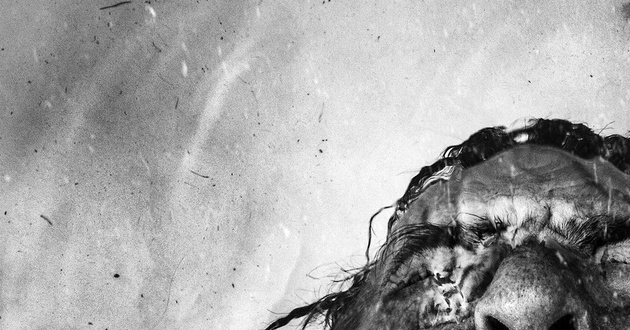 >> As a publication we try not to let ourselves get blown away by much, so our sensibilities can stay finely attuned and able to identify the truly special stuff when it comes along. With that said, we are blown away each and every time we listen to the new, debut full-length from Spectres, a gloriously noisy and astonishingly ambitious set of hard psych and noise-'gaze called Dying. Spectres is a Bristol, England-based quartet and their record is among the strongest debut sets we have ever heard. Dying is populated with tunes that echo the West coast-styled blues undertones of The Warlocks as well as the ecstatic noise of Sister-era Sonic Youth and JAMC. So often we talk about texture as an aspect of a thing, but it is exceedingly rare when a record is so dominated by texture in such an enjoyable fashion: herein feedback and discord regularly stretch across minutes and up against the stereo field as a steady rhythm section reliably propels the compositions. Dying situates the listener neck deep in a cacaphonous, bluesy doom so attractive and entrancing that you won't want it to end. The foursome is at its best when it stretches out into the LP's longer songs, including the ominous "This Purgatory" and "Blood In The Cups," where Spectres establish persistent grooves and adorn them with beautifully, provocatively splayed noise. Closer "Sea Of Trees," which clocks in at more than nine minutes, is epic in every sense of the word. The tune touts a relatively placid, meditative opening, layers in lead guitars and panned noise and dreamy, buried vocals, and then unfurls stunning curtains of blissful blammo beginning at the three-and-a-half-minute mark. A few minutes into that assault one just might start seeing the fabric of the universe, the meaning of everything, dolphins. It's complete madness. It's a joy to behold. Hide your children and your pets. London-based Sonic Cathedral issued Dying earlier this week on 12" gatefold vinyl, CD and as a digital download, and it is worth pointing out that a deluxe edition of the LP comes with a ouija board. Or it did -- according to the Sonic Cathedral digital storefront the LP, which was pressed to translucent gray vinyl, is already sold out, after only being officially on offer for two days. It looks like one can still acquire it on black vinyl (probably without the ouija board) at the moment via the Rough Trade shoppe, but you had better act fast. Spectres are presently engaged in a tour of the UK that persists through the weekend, takes few days off, and then runs until 7 March; take a look at all the tour dates right here. Buy Dying from Sonic Cathedral on LP or CD here; the digital download can be snatched via the Bandcamp embed below. We give this set, which was mastered by Spacemen 3's Sonic Boom, doncha know, our very highest recommendation.

>> Mid-fi bedroom pop is having a moment... although we suppose it is always having a moment. But what with the popularity of pensive millennial balladry from operators like Alex G, RL Kelly and Cloud's Tyler Taormina, it feels like there is a new and contemporary shape to things. Brooklyn, of course, is well-represented in what we'll haphazardly call a movement, and notably so by Massachusetts native John Lutkevich, who operates under the nomme de guerre Soft Fangs. It's more accurate to term Mr. Lutkevich's work attic pop, as he recorded the bulk of his self-titled, five-song debut EP -- which recently sold out of its initial run on cassettes issued by Seagreen Records -- under the eaves of his parents' residence. Subdued guitars, pensive lyrics and persistent ride cymbal rule the collection, which thrives on strong melodies and a palpable late-night vibe. "Dog Park" is led through a light bounce by acoustic guitar chords; the arrangement is appointed with quirky analog-sounding synth and nostalgia-inducing twelve-string (or emulated twelve-string) leads. The highlight of the collection is the 'gazey strummer "You're The Best," which boasts the EPs most sturdy rhythm tracks and explodes into thundering choruses splashed with buzzing and vibratoed guitar chords. "You're The Best" is perhaps the loudest and most dynamic tune because it is the only one from the collection not recorded in the aforementioned attic. Instead, the song was tracked at Norwood, Mass.'s Hanging Horse Studios. Attentive readers may recall that this is the same studio where rising Boston indie-punk threesome Julius Earthling recorded its debut EP For. Additionally, Soft Fangs was mastered by Bradford Krieger, who also mixed, mastered and took a production credit on For, for those of you keeping score at home. Soft Fangs' debut EP was reissued by Disposable America Feb. 21 as a limited edition 7" vinyl record, limited edition cassette, and digital download. The 7" is pressed to black media in an edition of 200 pieces, and 100 cassettes are on offer, with those miraculous little reels of magnetic tape encased in red plastic. Buyer beware: the 7" does not contain the very solid track "Believers," so completists may want to opt for the cassette or, we suppose, both the cassette and vinyl. Lutkevich recently recorded a shoe-brand sponsored session, so we suppose those recordings may see the light of day sometime; here is a video of him performing "Point Of View" during the session. Stream all of Soft Fangs via the Bandcamp embed below, and click through to purchase the set from Disposable America.

>> Depending on which publications you read in certain early days of the '90s, the prevailing wisdom was that the primary front in the indie rock revolution was strung out along the I-40 in North Carolina. There labels like Mammoth and Jettison turned out big-guitar sounds from luminaries and shoulda-been luminaries like The Ashley Stove and Finger and Pipe. A new act out of Portland, OR called Wet Trident sounds as if it were put in cold storage in '92 down North Carolina-way and is only now emerging to learn what hell the Internet and reality television has wrought. Wet Trident is fronted by Matt Dressen, who Clicky Clicky readers likely know better as the drummer for Portland dream-pop goliaths Lubec; indeed, Mr. Dressen is ably abetted by certain of his Lubec cohort here. But the slacker anthem sound Wet Trident nails on its new tune "Stove Prairie Road" is scruffier, more direct and dare we say more Bachmann-esque, driving the rising riff from Los Campesinos!' "Romance Is Boring" straight down to the bottom of the bottle for that last warm sip of beer. For whatever it is worth, Google tells us that "Stove Prairie Road" is apparently a popular biking route in Colorado, which is not terribly near either Portland or North Carolina. But more importantly for our purposes, "Stove Prairie Road" is a very promising preview track from a planned EP from Wet Trident called Power Fails And Other Foreign Delights. There's no word on when the full EP will be available, but if you keep pressing play on "Stove Prairie Road" via the embed below, we are fairly certain it will turn up eventually. Power Fails And Other Foreign Delights was recorded with Portland's go-to engineer and producer Robert Komitz at the Frawg Pound.