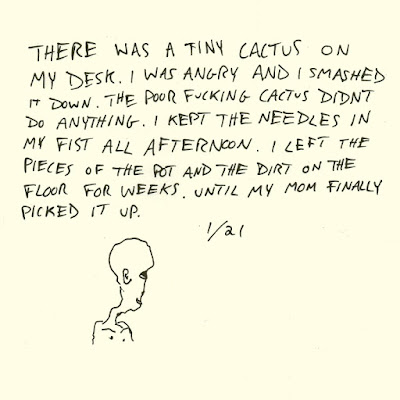 The rise of Boston slowcore trio Horse Jumper Of Love has perhaps surprised extra-scene observers whose attention was trained so firmly on luminaries such as Speedy Ortiz and Krill that they could not perceive the threesome at the fore of the inevitable, inexorable next wave swelling in the distance. But now that the trio's transcendent, self-titled debut long-player is here, Horse Jumper Of Love's preeminence is undeniable, no matter the vantage point. Its Horse Jumper Of Love is among the enigmatic band's first forays into full-band recordings, yet it shines brightly as both a statement of purpose and resolute expression of a startlingly whole and uncompromising aesthetic.

Horse Jumper's roots date to at least 2013, when principal songwriter Dimitri Giannopoulos' skeletal demos began cropping up on the Internet. Not long after the threesome gelled, it developed a reputation for delivering expansive, cathartic live sets. It is little surprise each member of the trio has a role in producing the new record’s mysterious, off-kilter sound. Jamie Vadala-Doran's beguiling and restrained drum work stops, starts and stutters without ever truly derailing, while John Margaris' minimal, haunting bass playing and backing vocals provide crucial ambiance; together, the rhythm section lends Horse Jumper's compositions a tangible -- if incalculable -- sense of danger. At the center of all this rests Mr. Giannopoulous' cryptic and often elliptical songcraft and playing. A deft guitarist, his short ringing leads pendulate between delicately understated and furiously heavy, often within the same song. Giannopoulous’ iterates and reiterates sonic and lyrical motifs, imbuing his plainspoken but philosophical musings on existence and the space we occupy with substantial weight.

Take for example the early preview track "Spaceman," a buoyant, crawling number presumably about existing separate and apart from public convention. Giannopolous sings of his America towel -- a reference to the tune "July 5th" -- and wields it as much as a literary device as a lyric. While we won't presume to speculate on its true meaning within the Horse Jumper narrative, its repetition suggests the towel carries some deeper importance. Horse Jumper Of Love's closing track "I Love You Very Much Forever" -- which again echoes "July 5th" – is actually a substantially slowed reformulation of the early Horse Jumper demo "Heathen." In addition to these internal references, certain songs point to the world outside the instant record as well. The short, instrumental interlude "I Want To Paint Horses... And To Have A Horse" recalls the ambient aspects of the 2015 demo collection Ur Real Life Dress. Horse Jumper Of Love’s "Bagel Breath" and "DIRT," arguably the set's two strongest tunes, are also culled from previously released demos; here they are given graceful full-band reworkings that thrum with copious distortion.

The record's peculiar cover art -- a scrawl that recalls the visuals for UK fuzz-rock troupe Yuck's early (and far superior) releases -- and accompanying vivid narrative feel of a piece with Horse Jumper Of Love. It also underscores the band's singular personality, a trait mostly ignored by appraisals of the record thus far; indeed, Horse Jumper Of Love has drawn quizzical comparisons to acts as divergent as Alex G and Radiohead. In our estimation, Horse Jumper Of Love is doing something that, while not entirely new, certainly distinguishes the act from its peers. The band's determination to plot its own course is far more praiseworthy than which indie rock critical touchstone a particular journalist feels they most closely approximate. Horse Jumper Of Love is out now on cassette via Disposable America and Gawk Records and can be purchased right here or here. Sources tell us that the tape is already on its second pressing. Stream three songs below, and peruse the band's pending tour dates with Soft Fangs, virtually pasted below. -- Dillon Riley 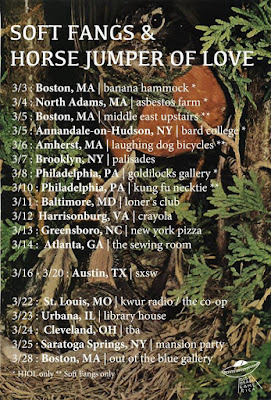