That Was The Show That Was: Ought with Trash Kit | The Dome, London | 26 April 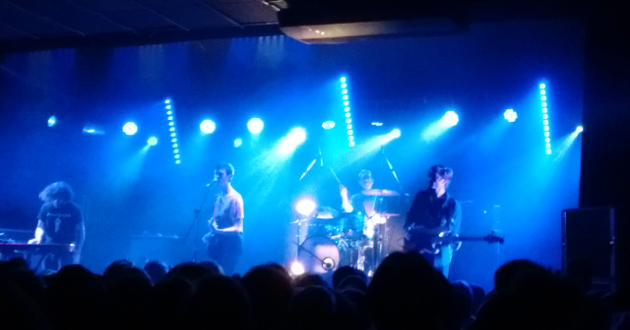 [PHOTO: Theo Gorst] Montreal-based Ought arrived Tuesday at London's Tufnell Park Dome in the midst of what seems like a never-ending tour, only four months since their last London appearance, and the surfeit of shows has the Canadian quartet in prime form. Sure, the band's set lists seem to vary only rarely, but where spontaneity may fall to the wayside a polished professionalism reigns. The result, at least earlier this week in London, was 80 minutes of taut indie rock, deployed to maximal effect.

The first half of Ought's set focused on music from its 2015 sophomore release Sun Coming Down, while songs from More Than Any Other Day –- the band's debut from the prior year -- consumed much of the remainder. The whole of the show underscored the intricacies and idiosyncrasies of Ought's music, in which paranoia regularly spars with a life-affirming jubilance. During "Men For Miles," fronter and guitarist Tim Darcy channeled the dystopian drawl of legendary The Fall provocateur Mark E. Smith, but elsewhere Mr. Darcy elided a frantic optimism, particularly during "The Weather Song." The collision of these opposing dispositions erected a thrilling tension during the performance, and is key to Ought being a particularly vital live act.

Sun Coming Down's "Beautiful Blue Sky" is the centerpiece of that record and proved to be the still point of turning for the night's performance as well. While on the album it is surrounded by other tracks that breathlessly change pace, the band's opus lingers when given time -- and apparently the blue lights illuminating the stage -- to meaningfully fade. For his part, during the song Darcy recounts small talk and other trappings of modernity until they become devoid of meaning. As his vocals left off Tuesday night, the hypnotic bassline that began the song continued on, figuratively echoing the track's repeated line "that is all that I left."

Elsewhere, the disconnect between hope and hopelessness was perfectly articulated during the rousing set closer "Today, More Than Any Other Day." The tune began with a swirling, murky guitar line reminiscent of Slint. Over this Darcy speak-sang "we're sinking deeper," before propulsive drumming from Tim Keen drove the song toward its thrilling next stage. The crowd lapped up the fronter's peculiar and captivating mannerisms -- which vacillated between camp and strict -– and readily permitted Darcy to lead them through the song's frantic paces. When he sang "one more time," the venue was a sea of wagging forefingers, the front rows mirroring the singer's enthralling movements, providing a fitting display of reverence at the end of a magnificent show.

Related Coverage:
That Was The Show That Was: Ought, LVL UP, Diet Cig | Great Scott, Boston | 30 Sept.

Email ThisBlogThis!Share to TwitterShare to FacebookShare to Pinterest
Labels: Ought, Slint, Talking Heads, The Fall, The Raincoats, Trash Kit