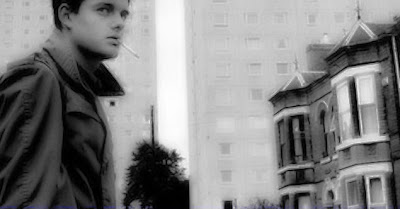 >> With the American release of the hotly anticipated Ian Curtis biopic "Control" edging closer, plans have been announced to re-issue post-punk legends Joy Division recordings in expanded editions. Read this NME item for track listings and a bit more information. We got in to Joy Division when cassettes were still a viable format, and as such we don't have these records on CD. As such, we're excited to get these, although we are apprehensive that remixing or remastering might alter the records. We'll see what happens. We're curious what effect if any the death of Factory Records impresario Tony Wilson Friday will have on the release of these reissues. "Control" debuted at Cannes in May; it will have its U.S. premiere Oct. 10 at the Film Forum in New York City. The songs comprising the soundtrack to the film are listed here.

>> Here's your weekly Johnny Foreigner update. The stellar Birmingham, UK noise pop trio did not win the Road To V competition we previously mentioned here. The upside? According to a MySpace post this apparently frees the act from a restriction that required it to remain unsigned while they were involved with the competition. Labels would be idiots not to snatch these guys up. Johnny Foreigner has tons of amazing material, they play tons of gigs, and we expect signing has got to be around the corner.

>> Argh. Another great UK band discovered and found to have broken up in the same day (this previously happened when we discovered Eddyfink last month; more about Eddyfink's brilliant "In For Me" later in the week). This month the find, via a post on the Just Gimmie Indie Rock blog that Johnny Foreigner mentioned in a recent post, is the newly erstwhile, two-MySpaces-having Birmingham quartet Distophia. Based on comments on its MySpace hacienda Distophia seems to have recently broken up. Head here to download the compelling track "Evil Baroness."

>> That A-Sides tour in October we've mentioned previously will be with The Velvet Teen and Say Hi (To Your Mom), which we remember being called simply Say Hi To Your Mom (no parens) when we reviewed their record Ferocious Mopes for Junkmedia here two years ago. According to the most recent news item at its web site, Say Hi To Your Mom is officially changing its name to simply Say Hi as of September and will release a fifth record in early 2008. Anyway, prior to the dates with TVT and Say Hi, The A-Sides will tour out to the west coast supporting vegan posterman and indie rock force of nature Ted Leo. You can check out those dates here. Incidentally, this song never gets old:

>> This Is Happening To Me has some pics of Dinosaur Jr. in Japan, performing, being mobbed by fans in the streets. Apparently people are just running up to J. Mascis and hugging him? Anyway, cool pictures are here.
Posted by Unknown at 8/12/2007 08:47:00 PM