That Was The Show That Was: Spoon | The Roxy 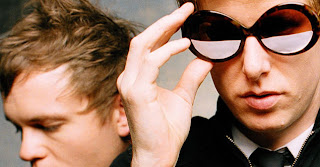 Indie fans who have been paying attention know that The Roxy isn't really where Spoon wanted to be Wednesday night in Boston, but the gentrifi-lifestylifi-famili-cation of Lansdowne Street got in the way of the Austin, Texas-based quartet's plans to sell a lot of tickets at Avalon last night, as this Boston Globe article helpfully pointed out a few weeks back. The fact that recent code violations or something at The Roxy had gotten the club's capacity knocked down from 1,300 to 775 meant that Spoon was going to be afforded the... errr... opportunity to sell about 1200 fewer tickets. The upside for the indie rock fan is that is 1,300 fewer tall dudes, or chatty Cathys, or camera clickers, or phone talkers, bar line cloggers, etc. The show was sold out by the time we checked the night before, and we expect it was sold out long, long before that.

A large reason for that is the fact that Spoon has been a band indie rock fans can really set their watches to for more than a decade. With the release of 2002's Kill The Moonlight the band entered the enchanted realm of critical darling-ocity, and the foursome hasn't looked back. This years's awesomely titled and No. 10-charting Ga Ga Ga Ga Ga is a triumph, a rock record that you can listen to and enjoy a million times over. In this way, Spoon has become dangerously close to becoming, well, beer. When was the last time you had a bad one? You kind of take beer for granted now, don't you? Perhaps what sets Spoon apart from America's favorite beverage is there may be some bad beers out there -- but there's no bad Spoon.

The fact the Ga Ga Ga Ga Ga is so good means it should have been little surprise that the band would kill live, but you never know, right? Needless to say the act exceeded our expectations by blasting through about 75 minutes of taut, gritty, cigarette-length tunes. The set began with "Black Like Me" at 9:15PM and the short encore ended with a mind-erasingly good, breakneck-paced "Jonathan Fisk." Along the way the band served up much of the new record (although we don't recall hearing our favorite cut, "Finer Feelings," or "My Little Japanese Cigarette Case") and scads of hits from the back catalog, including "I Turn My Camera On," "The Two Sides Of Monsieur Valentine," "The Delicate Place" and a ludicrously spirited rendition of "My Fitted Shirt" from 2001's Girls Can Tell. Last night's take on the Motown-channelling tune "You Got Yr. Cherry Bomb" felt particularly Stonesy.

The highlight of the set was an especially ethereal take on "The Ghost Of You Lingers" from the new record, which featured Mr. Daniel pleading into the microphone while flanked by Eric Harvey and Rob Pope pounding out the ascending melody on two keyboards. Dramatic lighting -- which featured heavily throughout the night and was a nice touch of tasteful professionalism -- alternately flashed a thick green hue across Mr. Daniel, who eventually strapped on Mr. Pope's bass guitar to take the song out. It was hair-raising.

One song that felt a little soft was the exceedingly catchy "The Underdog." The band performed the number without the prominent horn section featured in the recording and the result was amusingly thin. It was hard not to notice Daniel turn to drummer Jim Eno and smile as the first horn riff should have been sounding out. Throughout the set at least one soundman was kept very busy manually riding the fader controlling the degree to which Daniel's vocal was drenched in reverb, and between that shifting aural perspective and the really quite good use of lights (complementary colors were often projected against the band and the white glass-paneled background -- when the reds and blues were paired it was like looking through 3-D glasses) the show was all the more dynamic.

And, for the record, Mr. Daniel did make a crack about how "roomy" the venue was because of the limitations that had been imposed on capacity. "It's a fire hazard, right?" he quipped, before tearing into another track. Spoon continues touring through early November (full dates below), and if you are already thinking as far ahead as the band is, perhaps you'd like to ring in 2008 with them in Chicago? NPR will broadcast the band's upcoming show at Washington, D.C.'s 9:30 club; the broadcast begins at 10PM and you can find more details here.