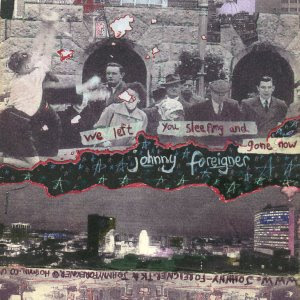 WeLeftYouSleepingAndGoneNow, the "lost" first Johnny Foreigner record, was recorded in the band's practice space and issued in 2005 in an edition of 40 copies packaged in handmade sleeves bearing photos of its beloved hometown of Birmingham, England. The surprise of the collection, recently unearthed through some persistent research conducted by our KeepingSomeDarkSecrets colleague Luke Cotton, is that it is remarkably detailed and textured for a band that is now better known for an irresistible, high-energy, bash 'n' pop sound. It's not that contemporary Johnny Foreigner music isn't sophisticated, but the band's commercial releases to date have drawn from a decidedly narrower palette than the tracks on WeLeftYouSleepingAndGoneNow. The tracks on that set, 11 in all spread across forty minutes and daisy-chained in places via some very accomplished segues, more often combine guitars, ethereal synths and ambient room sound than the lacerating electric guitar, bass and drum kit that provide the foundation for Johnny Foreigner in 2009. This week the band is in Brooklyn to record its sophomore set for Best Before Records with Alex Newport; it released the triumph Waited Up Til It Was Light in June 2008.

WeLeftYouSleepingAndGone suggests that the aural difference between proto-Johnny Foreigner and contemporary Johnny Foreigner may be as much the product of personnel changes -- namely the departure of founding member and multi-instrumentalist/synth aficionado Daniel Boyle and the installation of current bassist and singer Kelly Southern -- as it is a barometer of the growth of guitarist Alexei Berrow as the act's primary songwriter. Speculation, to be sure, but also a convenient answer to a question perhaps even the band hasn't considered. Stylistically, there are fewer hammer-ons, fewer lyrics even, as well as less distortion, less drumming. In their places are acoustic guitars, accordions, synths, snippets of conversation and general ranting tucked away in corners of the mix. There is a carefree and expansive experimentalism that is bracing.

Take for example the wild tumult and the ensuing, surprisingly quiet close of "His Floor Is My Ashtray": the tune quietly nestles into a reverie built on a reversed drum track, plucking on the guitar strings behind the bridge and band fronter Alexei Berrow murmuring "he just calls it like he sees it" over and over again into the fade. And the clarinet in "A Slow Song For The End" is wholly sublime. And "Sword Buried" is largely built around an Aphex Twin/mid '90s electro-trance beat. This sort of experimentalism isn't completely absent from the recordings of "modern day" Johnny Foreigner, but it seems to have been compartmentalized into seques and sections. Fans of the band's recent singles will note that the spoken-word section in the middle of "My Interest In Saving You Is More Than Idle Curiosity" -- a song that fades into a gorgeous collage of radio static and synth that pans around the stereo field like light from a lighthouse beacon -- is a definite precursor to Mr. Berrow's rant that ignites the coda of "Salt, Peppa And Spinderella." WeLeftYouSleepingAndGoneNow, as we stated supra, is a hyper-limited edition item, but fans of the band should make certain to get it in their collections somehow. To get you started, below are MP3s of two tracks from the set.