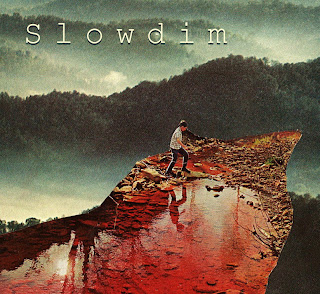 Given the slow, incremental progress that brought Slowdim to this point, the Boston indie pop quartet's sparkling, self-titled debut full-length evinces a remarkable degree of carefree ease that almost certainly belies the sweat and hours ploughed into it. Indeed, Slowdim streets this week as an exclamation point at the tail-end of a series of digital singles, compilation tracks and EPs, a tour de force of bright, melodic guitar pop that situates songwriters Paul Sentz (formerly of This Car Up, who we wrote about here in 2009) and Eric Ryrie (ex-The Shills) at the peak of their powers (sorry, boys, it's all downhill from hereLOLZ -- Ed.). The giddy momentum of opener "Up Stream" and the equally buoyant follow-on "Wishing Well" propel the collection with such energy that its spiraling final number, "Leave Our Names," comes too soon every time.

Certain of the music on the new record will be familiar to fans. Slowdim issued the ridiculously catchy album track "Money" as a single in Feb. 2012, and a year earlier the quartet released the Spirals EP (which now appears to be something of a rarity, as it has been removed from Slowdim's Bandcamp page). The EP featured early versions of "Don't Cough Me Out" and "Wishing Well," and the impressive evolution of the former song -- from a welterweight, hook-laden chant to full-blown, arena-ready rocker with ripping guitar solos -- illustrates the power and payoff of the quartet's wood-shedding over the last few years. Indeed, there is nary a songwriting misstep on Slowdim.

But while its songs are worked over, they are not overworked. To be sure, there is plenty of flourish -- the swoony "ooohs" complementing Eric Ryrie's reedy tenor on the sweet ballad "Can't Stop Falling;" the glimmering guitar appointing the verses of "Wishing Well" and "Birds" -- but there is nothing superfluous. Even when Slowdim stretches out, which they do ably during their shoegazing epic "Uh Oh," layering guitar upon guitar upon guitar to form a curtain of dense melody and noise, the record does not meander long, as the uptempo strummer "Laid Flat" immediately puts the record back on pace. Bassist Ana Karina Da Costa's voice plays a strong role backing up and harmonizing with those of Mssrs. Sentz and Mr. Ryrie, and is crucial to the overall sound in the same way as Phoebe Summersquash's was for Small Factory (or, for you Philly old-timers, Kara Lafty's was to Moped).

Slowdim surpasses the quartet's prior efforts by every metric, but its ultimate success manifests in the same way: listeners are left wanting still more music. While rock and roll inevitably suffers when we try to assign to it didactic intent, the lesson of Slowdim's long-awaited LP clearly is take the time to do it right. Two tracks, the aforementioned "Up Stream" and "Leave Our Names," are currently previewing on Bandcamp; stream them via the embeds below. The foursome plays a record release show at Great Scott Thursday with support from Night Fruit and Fedavees; all the details are at this Facebook event page, and hopefully the band will have product on-hand as there is no way to pre-order Slowdim as of yet.

I really did like this review. I love your use of words when describing instruments like "Glimmering guitar". Your analysis of the songs were great!