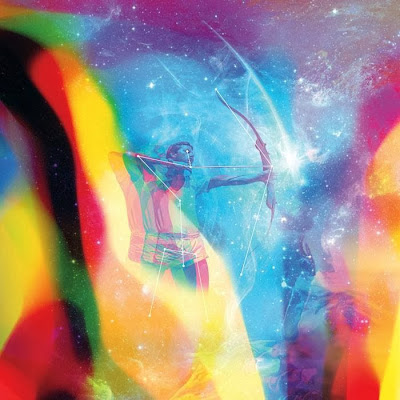 "We all make quite focused records individually so... it's our 'guilty pleasures' album." That's the defining statement from Neal Halstead regarding the debut full-length from Black Hearted Brother, the Slumberland-signed supergroup comprised of Nick Holton (Holton's Opulent Oog), Mark Van Hoen (of classic electronic-shoegaze group Seefeel, soon to be reissued by Light In The Attic) along with the aforementioned member of shoegaze pioneers Slowdive and later Mojave 3. And while the results collected on the album Stars Are Our Home are almost defiantly scattered, each song on this marvel of a record finds the pedigreed trio playing to strengths, and sounding like they're having fun doing it.

The long-player's first three tracks, taken as a triptych, evidence Black Hearted Brother excitedly trying on different hats as its modus operandi steadily gels. The band introduces itself with the opening instrumental title track, whose warm, foregrounded synths are run serially through all manner of filters, pads and circuits. As the rich tones gently ebb and flow, a clean guitar and metronomic kick drum propel the song. The trio's love of space rock, '70s German progressive and early electronica are apparent, and these sounds are referenced regularly across the dozen songs of Stars Are Our Home. Lead single "(I Don't Mean To) Wonder" thrills in the second slot and marks the first of many stylistic shifts on the collection, as the threesome leaps decades ahead to the sounds of Halstead and Mr. Van Hoen's early '90s heyday. The song's thick distortion and groaning feedback give way to a plaintive verse that uses the same sort of long-delay vocal production that marked much of Halstead's 1995 Slowdive swan-song Pygmalion. "(I Don't Mean To) Wonder" then mounts a great one-off chorus, which points to a powerful instrumental outro that decrescendos before embracing the fuzz once more; it's here listeners can first sense the giddy delight in collaborating that spurs Black Hearted Brother. With the third track "This Is How It Feels," the trio's songwriting comes more sharply into focus. The bright and pristine pop song commences with a bobbing, bass-led verse featuring chipper snare hits that smartly contrast with the lovelorn vocals. This melancholy section is interrupted by an exuberant, organ-driven chorus that recalls both Stereolab and jubilant Motown backing vocalists.

The balance of the record adheres to the blueprint established by the opening triptych -- save for the remarkable album highlight, "Time In The Machine." The centerpiece of the album, "Time In The Machine" is so vibrant, animated and fully-realized that it stands tall within this set of very good songs. The tune opens with an orchestra of bass, synth strings, delicate acoustic guitar and galloping drums; it's a dead-ringer for the classy drama that is the bread and butter of bands like Broken Social Scene. That's a funny comparison, as it is likely that the principals of Black Hearted Brother directly influenced the work of Kevin Drew and his Canadian cohort. This reviewer is going to go so far as to consider it a "teacher becomes the student" moment, and it is awesome to hear it play out as Black Hearted Brother build a subtle, yet monumental, piece. Considering the lives Halstead, Holton and Van Hoen have lived, the emotional resonance echoes powerfully. After the moving introduction, the song reveals its primary motif to be the downcast, perfect acoustic melody that anchors the wall of sound around it. Halstead's voice softly intones a mantra whose simple melody plays against the chord changes, steady rain of synth and locked, delay pedal whooshes. The song resolutely builds but tapers before achieving an ultimate climax. Instead, it slowly cools with a bruised, withdrawn pride that leaves a long-lasting impression.

Though Stars Are Our Home -- which will be released by Slumberland Tuesday -- may be seen by its creators as an exercise in a lack of restraint, the principals' own pathos and consideration instill a sense of purpose that highlights just how much they love what they do. That alone is enough to make Stars Are Our Home a recommended release, but, more importantly, the record represents a new morning in the careers of honest-to-goodness alt. music lifers. Buy the record as a double LP or CD from Slumberland right here. -- Edward Charlton