Together With Together: Clicky Clicky Presents Two Nights of Abstract Electronics And Indie Rock May 12+14 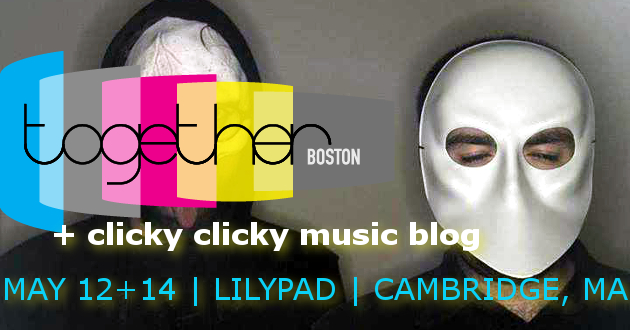 As a long time admirer of one of the driving forces behind it, we could be none more pleased to announce Clicky Clicky has partnered with the annual Together festival to bring abstract electronics and indie rock to adventurous listeners next month. Whether it be serendipity or silliness, we somehow have ended up presenting not one but two nights of programming during the five-year-old festival's seven-day run this year. First up, on Tuesday, May 12, Together and Clicky Clicky present folktronica/collage duo Skinny Bones and abstract electronic improviser Dinnersss (a/k/a producer Jimmy Hughes) at Lilypad in Cambridge's fashionable Inman Square. That night of programming is enough to raise pulses out there among the cognoscenti, but we've got yet more bunnies up our pant leg: on Thursday May 14 we present at the very same venue contemporary 'gaze greats Strange Mangers, Bostonian Virginia De Las Pozas' charming and other-worldy electronic project Couples Counseling the creaky and haunting strummery of trio Horse Jumper of Love, and a very, very special performance from slowcore giants (and recent Kill Rock Stars signing) New Dog. The Tuesday show is all ages, a 10PM start, and will cost you five American dollars, while Thursday jumps off at 8:30, is all ages, and will cost eight American dollars; Together festival passholders can walk in like royalty and not have to gesture toward their billfolds at all.

We would need many hands to count up all the reasons to be excited about these musical programs, but let us just drop a few here. The music on Skinny Bones' 2014 debut Noise Floor feels as unbounded as the work of Syd Barrett, but as deeply personal as the harrowing and beautiful music of Bad History Month. Dinnersss' recent and entrancing modular synth reverie "Mise En Place" (embedded below) is evocative head music and among the most exciting electronic music we've heard coming out of Boston in this decade. Equally enticing are the electronic sounds of Couples Counseling, which at times seems to provide Boston's most on-point, contemporary response to Nuno Cannavarro's classic 1988 masterwork Plux Quba Horse Jumper of Love's recent EP Ur Real Life Dress builds up a slow and dusty, lower-case-g gothic head of steam and hits a groove on closer "Nose Bleeder," all of which makes us excited for the trio's forthcoming full-length. That live set from New Dog? It's a warm-up for the act's forthcoming European tour, and may very well be the band's first show as a duo: former Soccer Mom kit-minder Justin Kehoe now backs fronter and former Travels/Metal Hearts principal Anar Badalov. The band's new set Classic Ballroom Dances is out June 2, and June 6 the pair kicks off a couple weeks of dates in Germany, Czech Republic and Belgium. Strange Mangers topline Thursday night, bringing with it the big-guitars/big melodies sound that Clicky Clicky devotes most of its time to championing. Strange Mangers had a big 2014, releasing a terrific and haunting EP Return Eternal as well as an entirely arresting comp of older material, and we are expecting big things from the act in 2015 as well.

It is worth noting these two shows -- Facebook Event Page 1; Facebook Event Page 2; pledge your allegiance now -- represent the first efforts of this blog's nascent Clicky Clicky Presents arm. Clicky Clicky Presents is already planning sick bills every other month for the rest of the year and into 2016. We will certainly keep you apprised of these future goings on, but for those curious about what we've got planned, here's a hint and another and another and another about what we're planning or July. But for now let's stay focused on the short term, and the many auditory delights the Together festival has in store for us. Sure, our bills are great, but be sure to scrutinize the entire schedule: there is a ton of hot, hot stuff going on. Don't sleep on it.