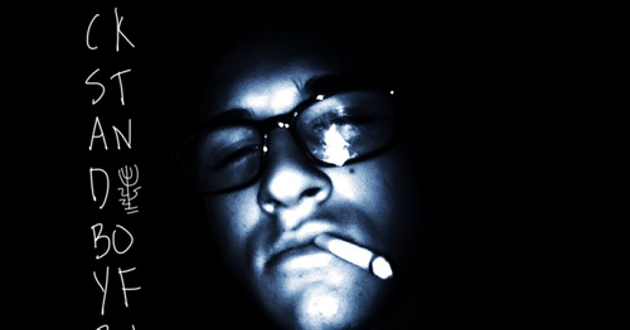 Maybe you weren't expecting your next indie pop savior to be a teenager from South Jersey. Yet straight out of Magnolia comes 19-year-old Kevin Rogers, who has built up a band around a charming collection that streets tomorrow on rising micro-indie Como Tapes. The act is called Kickstand Boyfriend, and the arresting record is called Christ's Night Out, and if you like the lilting wistfulness of The Coctails and Archer Prewitt's solo work, or even the chiaroscuro catharsis of contemporary Boston hitmakers Kal Marks, then Kickstand Boyfriend is the band for you. Christ's Night Out presents a window into the youthful ennui and disillusionment of post-lapsarian life in small-town Jersey; in press materials Rogers speaks of losing friends to addiction, of, in effect, innocence reduced to cinders. The ominous bass line and mildly venomous vocal on "Born To Be Destroyed," and the increasingly forceful drumming of "Journey Home High Priest," darken the mid-section of the collection. But elsewhere breezy guitar chords, clean leads and Rogers' resigned tenor win the day, and limn the proceedings with an (albeit moody) lightness that is Kickstand Boyfriend's most appealing quality. The wonderfully realized "House Rules Waltz" is a highlight of the set, as is "Lying In A Coffin," a surprisingly bright and nearly cheerful number in spite of the lyrics "I'm just lying in a coffin... and all my best friends are already dead / they're in my head." Situated at opposite ends of the record, "The Pines" and its freeing instrumental foil "The Pines Part II" sparkle with something like optimism.

Attentive readers will recall that Como Tapes in March issued a solid, posthumous collection from the Oberlin-bred indie act Diocese, which we wrote about here. The label releases Christ's Night Out tomnorrow, but it is available for purchase now via Kickstand Boyfriend's Bandcamp yert on "nightclub pink" cassette and digital download. Christ's Night Out is being fêted with a release show tomorrow at The Fire in the great city of Philadelphia, with support from Choice Blanket (members of which back Rogers in Kickstand Boyfriend), The Noises That Sounds Make and Gregory Michael Jordan; all the details about the show are right here. The record was recorded at Gradwell House with former Up Up Down Down Left Right Left Right B A Start [this!] guy Dave Downham overseeing mixing and mastering. Kickstand Boyfriend previously released a demo EP via Bandcamp early this year; the set was called Chocolate & Pornography, but it has already been deleted from the Interzizzles. Other "demos and throw away songs" from last summer met a similar fate. But what you can listen to right now, dear rock fans, is all of Christ's Night Out via the Soundcloud embed below. And if you are in Philly tomorrow (it looks like it is an early show?), you know where to be.

Email ThisBlogThis!Share to TwitterShare to FacebookShare to Pinterest
Labels: Archer Prewitt, BBC America, Choice Blanket, Diocese, Gregory Michael Jordan, Kickstand Boyfriend, The Noises That Sounds Make, The Sea And Cake, Up Up Down Down, Vehicle Flips