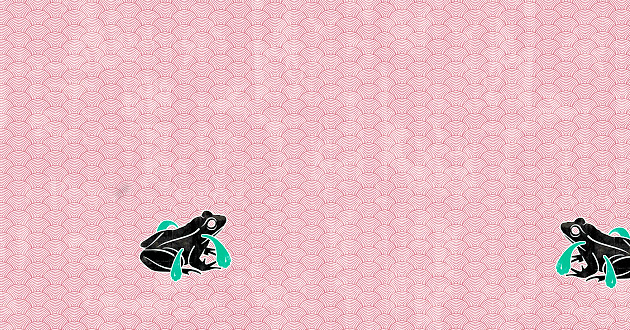 >> London-based Audio Antihero has made a cottage industry of identifying smart, singular talent on both sides of the Atlantic for the past five years, and while the label claims to be shuffling toward a planned obsolescence, it also seems to autonomously keep doing its thing like a mis-programmed robot in spite of label head Jamie Volcano's efforts to wind things down. And so at the end of the month Audio Antihero gives us the sparkling and weird debut full-length from Queens, New York-based lo-fi duo Frog. The act is comprised of guitarist/singer Dan Bateman and drummer Tom White, but if you are imagining something garagey a la White Stripes, you're well wide of the mark. Unless, that is, you stop that last sentence at the word "imagining," because the pair's bottomlessly wistful record, which is really actually titled Kind Of Blah, often feels as if only Messrs. Bateman and White's collective effort thinking about all things Frog keeps its ethereal and other-worldly music from popping like a speech balloon in a comic strip and dissipating like a fever dream. Kind Of Blah presents a very personal, sepia-toned collection of songs. Layers of clean guitars, humming synth chords, polite drumming, and murmured vocals pile up just high enough to offer a perch from which to peek through a smeared window at an innocent and imaginary New York.

The band's list of influences name-checks Hank Williams, Silver Jews and The Meat Puppets, and its songs boast ready hooks and a trebly sound that recall the AM Gold of the '60s and '70s, but even all of that only partially accounts for the strange wonders of Kind Of Blah. The entire set feels like it exists outside of time; the title of "Wish Upon A Bar" seems more appropriate for a Garth Brooks record, but the reality is the tune's pastoral drone feels like a constant, noisy dawn. "Knocking On The Door" sounds like Tinariwen's concurrent approximations of Traffic's "Can't Find My Way Home" and Supertramp's "Goodbye Stranger." Yes, we really did just type that sentence. The most sonically dense and emotionally potent point on the record is the crashing crescendo of the relatively rocking "Photograph." Astute readers will discern that we've yet to even mention any of the preview singles for this record, which we reckon is a testament to the inherent breadth and depth of Kind Of Blah as an album. The collection was recorded in a derelict bowling alley under a cafe in Queens and it will be released by Audio Antihero on LP and as a digital download May 25. The record is already available for pre-order right here and the three preview singles -- "All Dogs Go To Heaven;" "King Kong;" "Judy Garland" -- are available for streaming below; Frog previously released a self-titled EP on the Monkfish label in 2013. The duo's next live engagement is tomorrow night at Palisades in Brooklyn, and full event details are right here.

>> Discovering a band just as they are on the cusp of breaking up is a disappointing story that plays out with some frequency for the avid music fan, and that's where Clicky Clicky found itself a couple years back when The Weaks' Evan Bernard turned us on to Dangerous Ponies. At the time, the Philly-based indie punk act fronted by Chrissy Tashjian was in the process of releasing its terrific Tenderheart EP; then it went out on tour, it came back, and it broke up. Sad face for the music blogger. But we are pleased to note here in these electronic pages that Ms. Tashjian now fronts the steadfastly rocking foursome Thin Lips, and her rock combo just last week issued a jarringly brilliant debut EP titled Divorce Year. The vital collection is more tense than Dangerous Ponies' swan song, likely due to the darker subject matter and not the personnel, as Thin Lips is comprised mostly of former members of DP. But while there is a bit less sunshine on Divorce Year, its four bracing songs are smartly composed and pack an emotional wallop. The syncopated, gripping opener "Nothing Weird" opens big with wiry guitar melodies and a stuttering rhythm, above which Tashjian offers insight into an unsteady romance with her very affecting drawl: "you're leaving today, and I'm staying put, I'd follow you there but I'd just shadow you into a rut..." Seagreen Records released Divorce Year last week in a limited edition of 100 cassettes, supply of which we expect is dwindling rapidly, as Thin Lips recently wrapped a tour with the amazing Hop Along and probably encountered a very receptive audience that likely included some kids who own tape decks. Two of the tunes on Divorce Year were previously issued in rawer form as a demo way back in 2013, a digital release that somehow eluded our attention, so all you completists might want to hit this link to get your ears on early versions of the rockers "Gemini Moon" and "Non-Monogamy Nightmare." Stream all of Divorce Year via the embed below, and click through the obtain the digital download on a paywhutchalike basis. Highly recommended.

>> When there are so many rock and roll balls in the air all at once, it can be a bit too easy to take your eye off one for a good long while. Which helps explain why it's been five years since we last checked in on San Francisco power-pop unit Propeller. Readers with photographic memories (or a willingness to use the search box at upper left) will recall that the act is built around songwriters Greg Randall and Will Anderson, who at least around here are best known as members of the original, left-coast iteration of our dearly departed Varsity Drag (that band played its last show April 30). Since we last checked in on Propeller, it has issued a second full-length and two digital singles, and its most recent offering is the cracking pair "Wish I Had Her Picture" b/w "Can't Feel These Things." The sparkling strummers (songs 26 and 27 in the band's oeuvre, apparently) carry the characteristically sunny melodies and sing-alongable choruses we remember from Propeller's earlier work, and it is still easy to hear the influence of Scottish hitmakers Teenage Fanclub (and maybe a touch of Fresno's The Miss Alans) in these latest two tunes. "Wish I Had Her Picture" presents three minutes of delightful jangle and tight vocal harmonies, and the free, fuzzy vibe continues into "Can't Feel These Things," the virtual B side. The two songs were released to the wilds of the Internerds via Bandcamp April 3, and you can stream them via the Bandcamp embed below. The band plays what we presume is a very rare east coast show May 29 at Leftfield in Manhattan, so if you are in "the city" that day, we would direct your attention to that there gig. One last notable fact: Messrs. Randall and Anderson recently marked 25 years of playing in bands together, which is a remarkable feat no matter how you slice it. Stream "Wish I Had Her Picture" and "Can't Feel These Things" via the Bandcamp embed below. You will be pleased that you did.