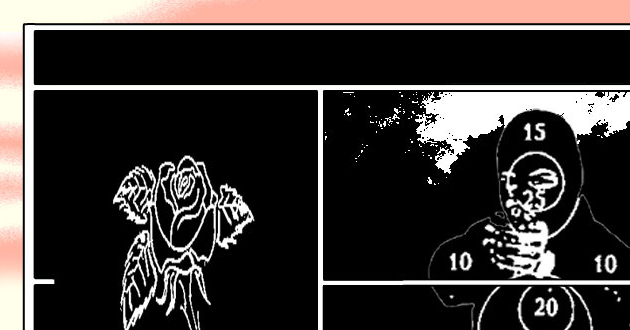 >> This reviewer thought that this day might come, when an indie rock release would cross his path and defy all efforts to categorize or "name" it (well, not _all_ efforts. -- Ed.). It arrived earlier this spring: Prime Example, the sophomore set from Atlanta's Hellier Ulysses, is exactly that. Issued on cassette in mid-March via Brooklyn's OSR label, the set offers up seven jazzy, minute-long post-punk cubist head-scratchers that nevertheless remain catchy and pack enough ideas to power an hour-long double album. Comprised of musicians "Advantage Fire, Humidity Ott, Pit Moder and San Forest," the Georgia quartet operates at the frontier of imagination and musicianship. During preview track and collection highlight "Genesis Is Dispersion" the group funks through a tough, Stax-styled guitar intro before sidelining into a brief, country-fried blues verse and a helium-voiced response, before the sweetly sung hook "I just can't let go" floats over three breezy chords. The warm, vintage-sounding and playfully overdubbed words and effects that pepper this tape call to mind '60s pop experimentalists like Godz, The Mothers of Invention and The Velvet Underground at their most unhinged and quirky -- a rarely employed inspiration within more conventional indie rock that works great here as deployed with mathematical precision by Hellier Ulysses. "Eat the Police," another highlight, balances clattering No Wave dissonance with bizarre time-signature fret runs and a hip-shaking disco beat. Really. In an age where so much new art seems to build upon the past, it is striking how much fresh humor, expression, originality and economy these four musicians conjure seemingly out of thin air. Prediction: in 40 years, a group of kids at the vanguard of 2060's youth culture will name-check Prime Example, and the world will have finally caught up to Hellier Ulysses' level of invention and hyperactivity. Get in on the ground floor now: order the cassette or grab the digital files from OSR right here. Hellier Ulysses' debut collection Hellier Ulysses was self-released by the band in 2013 and issued on cassette by Egg Paper Factory a year later. According to a statement at its web site, nine-year-old OSR is winding down operation in 2016; the outfit's commitment to releasing innovative music is commendable, and we hope the label's proprietors will remain involved with identifying and exposing talent in some fashion going forward. Stream Prime Example via the embed below. -- Edward Charlton

>> Whispered, mysterious, bruised and grinding: that's the way we prefer our classic shoegaze, and Chattanooga's Lacing seem to have -- in some sort of "Weird Science"-esque scenario -- taken those qualities and used them to create a pristine swimsuit model version of the sound. This, folks, is the stuff. On the quartet's four-track, self-released debut cassette Honey Glow, Lacing assaults the senses with tidal waves of distorted and treated guitar, crashing drums and barely-there vocals, creating crescendos of impressionistic melody all along the way. Ever since the twinned landmark albums of 1992 -- The Ecstasy of Saint Theresa's Susurrate and Lilys' earth-shaking In The Presence of Nothing -- this reviewer has pined for similarly hushed and alluringly veiled music that retains a live, practice-room exuberance. Honey Glow deliciously scratches that very specific itch. A lone, flanged guitar ignites opener "Gloom" (a guitar effect rarely pulled off tastefully, we might add) before the figurative skies figuratively open up and thunder and rain flood the stereo field. The drumming, in particular, gives these songs a spirited immediacy, and echoes the sturdy gallop of post-'gaze groups like Hum. Collection highlight "Needle" switches primarily between two sections in the style of My Bloody Valentine, but does so with such manic fervor that its three minutes feel like one. And, after three short and pounding doses of noise-pop perfection, Lacing closes its abbreviated set with an epic title track. The tune offers 11 minutes of glistening sheets of suspended-animation guitar notes that accumulate into sense of time-traveling curiosity. Everything about Honey Glow leaves the listener wanting more; in our modern age of over-sharing and lack of subtlety, the EP offers a powerful and addicting experience and marks Lacing as one of the most vital concerns of 2016. Buy the cassette now from their Bandcamp wigwam here -- at press time only seven of these gems remained. To circle back on the Lilys record briefly: Frontier Records strongly hinted here in March that it will reissue In The Presence Of Nothing this fall. Keep your fingers crossed. -- Edward Charlton

Email ThisBlogThis!Share to TwitterShare to FacebookShare to Pinterest
Labels: Godz, Hellier Ulysses, Lacing, Lilys, The Ecstasy of St. Theresa, The Mothers Of Invention, The Velvet Underground