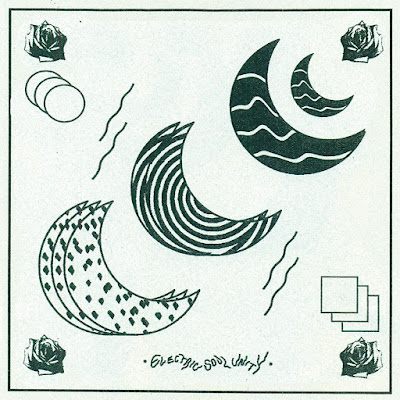 San Francisco power-rock five Happy Diving return this week with a stirring long-player whose mutability and periodic lightness leaven the act's heady mix of bracing power and ready melody. In terms of sonic development, the progress feels fairly conventional for a second album, but just because the path is well-trodden does not diminish the act's cracking songwriting. Indeed, Electric Soul Unity collects 12 tunes ripe with gritty, fuzz-caked power chords, tastefully bummer vocals, and newfound nuance that expands the quintet's domain in welcome ways.

Opener "Bigger World" both references the title of the band's 2014 debut on Father/Daughter Records [review] and assures fans that Happy Diving very much understands a formula that has worked so well for them. Commencing with a blast of mid-range guitar feedback that abruptly tosses the listener into the take, "Bigger World" descends into a finessed, palm-muted chug that emphasizes the heavy low end that made Big World such a favorite in the underpop underground. "Don't Be Afraid of Love" follows and makes plain that Happy Diving has no intention of softening its sound or increasing the clarity of production. As with its earlier material, the band's noisy sonic signature feels well-designed to transport listeners to some ideal house show environment, where shuddering amps and the thump of the kick drum reverberate from concrete walls and ratty rugs.

It's not until fifth track and highlight "Head Spell" that the band deviates from its tried and true. Here strummy and clean grunge chord progressions and dynamic blasts of distortion echo second-wave '90s alt.rockers Cracker and, well, Everclear with carefully considered, beautiful sadness. The relatively spare approach offers just enough space within the production to reveal more tenderness than the Bay Area bombers' usual two-minute fuzz blasts typically allow. "Head Spell" proffers a big-tent take on the '90s-rock revival that embraces the cheesier songwriting of the more commercial end of the era. Why not?

The back half of Electric Soul Unity features still more surprises that make it the stronger side. "The Call, It Thunders" features some of Happy Diving's best lead guitar hooks, while "Pain Country" takes another run at the quieter electric style of "Head Spell." "Unknown Feeling," a 104-second acoustic (!) solo number, is the album's biggest surprise, and stands in stark relief sonically while suggesting an affinity for aspects of Lou Barlow's catalog. To close the proverbial circle, the riffage resurfaces with closer “River Will Flow” (whose opening suggests Dinosaur Jr. interpreting "Don't Fear the Reaper"). The final cut offers another welcome addition to the mix, some slight dual-singer harmony that modulates the album's otherwise monochromatic vocals.

Speaking of, a monochrome feel represents Electric Soul Unity's sole Achilles' heel. Despite the efforts to vary the album's feel and flow, the persistently pounding Blue Album rock guitars can dominate to such an extent that some of the nifty songwriting on this Jack Shirley-produced set is obscured. Still, Happy Diving's successful revision of classic '80s and '90s indie rock not only reframes great moments of the era, but also presents fans broader opportunities to connect with the band. When in doubt, just play the thing real loud: it's rock and roll. Electric Soul Unity is slated for release Friday on black, white, or coke bottle clear vinyl, CD, cassette or digital download; pre-order the collection in any format right here from our friends at Topshelf Records (which also released Happy Diving's terrific "So Bunted" 7" last year). Happy Diving is in the final leg of a lengthy U.S. tour, and the dates for the final two weeks are posted below. Get to the gig. -- Edward Charlton