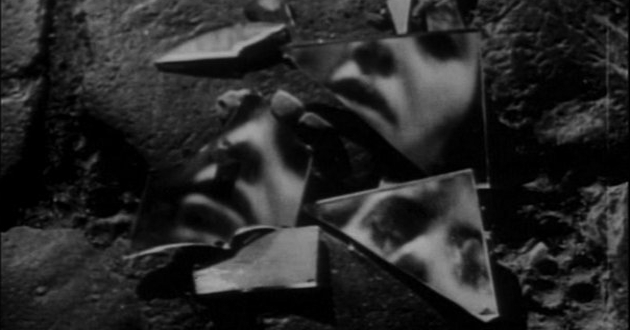 >> Our music fandom is reborn with each great surprise, as when the unexpected find flips up against our thumbs in the record bin, or when a sound we love appears out of the blue right in the blog's backyard. This latter circumstance is what has us jazzed lately, said jazz having been sparked when friend-of-the-blog Jeff Breeze sent us a link to a smashing new debut EP from upstart Somerville, Mass. four Strange Passage. The quartet's Shine And Scatter EP echoes the melodic, guitar-centered sound of the turn-of-the-'90s UK with surprising competence and confidence. Indeed, the short set's four songs echo The House of Love and the early RIDE EPs, and -- more contemporaneously -- are startlingly reminiscent of the massively underrated and short-lived aughts combo The Boyfriends. While there is a thread of shoegaze shot through Strange Passage's alluring brand of guitar pop, and Boston continues to have a strong share of contemporary 'gaze practitioners, Strange Passage's music still feels somewhat delightfully off-trend. There are just not a lot of acts out there right now trying to write the next "Chelsea Girl" or "Shine On," are there? Shine And Scatter also boasts some production choices that make the EP feel particularly mature for a debut, including putting an understated, even-keeled vocal up front in the mix. It's a confident, but not showy, move. And so it almost feels as if Strange Passage has foregone the trials and travails of writing a first and second EP, and have just jumped in with a terrific third. Each song is dynamite, but the uptempo rager "Viaducts Burning Down" stands out with its urgent intensity, and the repeated feeling of resolution that comes with each recitation of the title in the chorus. Shine And Scatter was recorded through the late spring and early summer with hit-maker Will Killingsworth at Dead Air Studios in Western Mass. and self-released via Bandcamp Aug. 16. As impressive as its EP is, Strange Passage has yet to play a show; its first live outing is slated for Sept. 30 at The Democracy Center in Cambridge, Mass., where they will be joined by Amherst, Mass. noisemakers Dirt Devil and -- we're told -- others. We're torn about urging everyone out to the show, as every band deserves a chance to get its collective feet under them before being subjected to scrutiny. But all the same, we feel like it's going to be exciting seeing Strange Passage blossom, so, you know, you should probably go. Stream all of Shine And Scatter via the Bandcamp embed below.

>> That LA dream-pop concern Snowball ii jumps styles with its new album and latest single "I Doughnut Want To Live" is little surprise, given band mastermind Jackson Wargo may consider notable shape-shifter Kurt Heasley's long-running, magical Lilys one of his lodestars. Snowball ii's clever February 2016 debut long-player ? was often a devoutly shoegaze affair, and its most recent music prior to "I Doughnut Want To Live" were spooky, ethereal covers of Lilys' "Black Carpet Magic" and "Day Of The Monkey" for Colorful Acts: In The Presence of Lilys, a Lilys-themed compilation issued by The Blog That Celebrates Itself over the summer (for short-tenure Clicky Clicky readers, if the prospect of a Lilys comp excites, you should also check out our own). And while much of the Snowball ii's forthcoming sophomore set feels influenced by Sufjan Stevens, the appealing ballad "I Doughnut Want To Live" stands apart in the new collection. The deceptively serene song is built up from patient acoustic guitar strums and glistening leads in the verse whose optimism plays against Mr. Wargo's somber confession in the chorus ("'cause I don't think I can love her like I did before."). "I Doughnut Want To Live" is the first taste of Snowball ii's long-player Doughnut Holes, which the band recorded and produced at its own The Doughnut Shop studio and will released via its own Doughnut Records Sept. 16 (sense a theme? -- Ed.). Snowball ii celebrates the record with a release show the same day; a third Snowball ii LP is slated for 2016 release as well. Stream "I Doughnut Want To Live" via the Soundcloud embed below.

>> Singer and songwriter Gregory Mendez has made a bunch of music over the years, and a fair amount of it with input from The Superweaks' Evan Bernard, among others. Projects including Airport and Getting Sick eventually led to a well-received singer-songwriter thing under his own name, perhaps out of a desire to simplify. That presumed yen is manifested both in Mr. Mendez's new moniker and music; his latest effort Phone Records is attributed to the yet-more-concise Mendez, and the self-released collection features nine tunes tracked to a smartphone app. We mention the means of production here not to encourage folks to start sending us an avalanche of crap they made on their phones, but to underscore that it is still novel to encounter a recording made on a phone that is this good. The trick, of course, is to start with great songs or song ideas, as Mendez does. Phone Records presents what may be an unanswerable chicken and egg question: is the intimacy of these recordings enhanced by capturing the bedroom sessions on a phone's tiny microphone? More likely the production is just a side-effect of making do, but there is substantial charm to the feeling of "being there" as Mendez plies his trade. Songs including "Try" and "Control" firmly echo the balladry of early Elliot Smith (although the latter tune cleverly incorporates the synth melody from Soft Cell's iteration of "Tainted Love"), but Phone Records' more dynamic tunes, such as the shuffling, early Yo La Tengo-styled "Stained Glass Boys" and "Gum Trash," are its strongest. Album closer "The Drug Trafficker's Daughter" feels demo-ish in the way one would expect a phone recording to be, but that's the other side of the "hey-this-was-recorded-with-a-phone!" coin: some stuff feels like an idea waiting for fuller treatment. But the bulk of Phone Records feels accomplished, evidence that while Mendez may be seeking simplicity, his songcraft remains robust. Stream the entire thing via the Bandcamp embed below; the cassette-inclined will be pleased to know they can get a limited edition physical artifact from Houston-based Some Weird Sin Records right here.