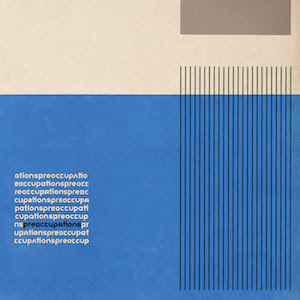 Preoccupations' 2015 debut (under its previous, controversial nom de post-punk Viet Cong) felt like a New Order-esque re-set following the untimely passing of guitarist Chris Reimer of Women -- the brilliant late-aughts band that first brought Preoccupations' Matt Flegel and Mike Wallace (joined here by Danny Christiansen and Scott Munro) to international (underground) acclaim. On its new eponymous sophomore set the band takes another unpredictable stylistic swerve, possibly in response to widespread criticism concerning the cultural insensitivity of its previous name. The rebrand provided a renewed opportunity for the foursome to reconsider its practice, and Preoccupations capitalized strongly by injecting Preoccupations with a dash of New Wave exuberance and structure that reveals another shade of the dark and classic post-punk sound it has explored since 2008.

Opener "Anxiety" churns upon itself in an extended ambient intro before dark synths and fuzzy textures begin to revolve mechanically around Mr. Flegel's low voice. Bright synth notes, entering at the minute-and-a-half mark, illuminate the proceedings and somewhat betray the cold and direct lyrics. Successor "Monotony" takes the approach one step further with billowing and reverberant melody lines and major keys that plot against the bleary song title. The pairing of heavily chorused rhythm guitar -- lurking in the right channel -- and Flegel's considered croon suggests his quartet may be aiming for the morose stateliness of the even-now-underrated The Psychedelic Furs circa Talk Talk Talk. Indeed, at times Flegel's breathless growl is a dead ringer for that of the legendary Richard Butler.

Album centerpiece and highlight "Memory" tackles more dynamic rhythms in its first frame -- a la Viet Cong highlight "Death"-- and also features a super nifty key change at its midpoint; here the band steps back to reveal a modulating synth tone that twists the song up into a falsetto-led groove, further convincing this reviewer that Preoccupations are embracing a subtly more positive and revelatory stance in key moments. The song's ambient outro wisely doubles back to remind the listener that the band have not forgotten their more characteristically pensive contemplation amidst the relative euphoria.

Lead single "Degraded" most closely hearkens back to the massive drum production and propulsive force of the group's first album, but still accommodates its contemporary penchant for single-note, high pitched guitar overdubs in the process. "Sense" uses simple organ and fizzing sound effects for a brief and well-placed change of pace, while "Forbidden" carries on the ambiance into the next track but adds percussion and whirling, carnival-like melodies for another surprising detour that declares the B-side of the record to be just as crucial.

As with every Flegel and Wallace-related release, the closer is always important. On Preoccupations, the band forgoes guitars almost completely for a retro-futuristic pop song that cements the post-Bowie New Wave connection. It's not until a Robert Fripp-styled guitar solo that the instrument even makes an appearance, and there it's in mostly wistful and epic celebration, rather than the morose gloom that had so previously defined this band. This, once more, underscores that Preoccupations has transformed the hurdles that have peppered its path into opportunities to push its boundaries, and as a result the band remains one of the more structurally original and stylistic daring indie rock bands of the day. Preoccupations was released by Jagjaguwar Friday. Purchase it on CD, LP or in a great bundle right here. Preoccupations play The Sinclair in Cambridge, Mass. October 12, and is basically on tour through the end of November. View complete tour dates at the band's web dojo right here. -- Edward Charlton