Review: "Inside The Smiths" DVD

Nearly as legendary as the music of The Smiths itself is the acrimonious relations between the principal members of the Manchester quartet. Particularly germane here is the discord between the rhythm section, comprised of drummer Mike Joyce and bassist Andy Rourke, and the chief songwriters, the enigmatic fronter Stephen Patrick Morrissey and guitar hero (and now Modest Mouse sideman) Johnny Marr. For a primer on the State of All Things Legal Regarding The Smiths read this 2005 missive that Morrissey posted to superlative fan site True To You. The relations between the factions of the defunct group, which fractured 21 years ago, is paramount in contextualizing "Inside The Smiths," released today by MVD.

The documentary is presented from the vantage point of Mssrs. Joyce and Rourke, a point emphasized repeatedly by odd interstitials of a weathered bass guitar flying through cityscapes. It only takes seven minutes for Mr. Rourke to raise the issue of the lawsuit. And the lawsuit, we expect, is a primary reason why there are no actual Smiths songs used in the documentary. The legal hurdle must be responsible for the curious spectacle of Mr. Rourke playing the bass part to "There Is A Light That Never Goes Out" halfway through the film while he listens to the song on headphones, so that all the viewer hears is his live bass playing, and not the full composition. And so the soundtrack to "Inside The Smiths" is comprised of quasi-Smiths musical wallpaper from the "fifth Smith," Aztec Camera guitarist -- and Smiths second guitarist on the The Queen Is Dead tour -- Craig Gannon, with additional contributions from The Doves and New Order bassist Peter Hook's act Monaco. 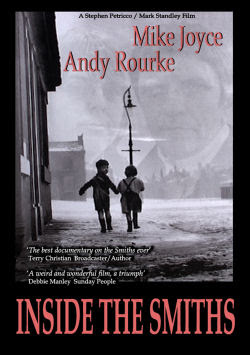 All that aside, Joyce and Rourke's willingness to share details and take viewers on tour of the places where important events transpired makes "Inside The Smiths" immensely watchable. For those of us hardly of an age to have much firsthand experience of the rapid rise and fall of The Smiths between 1982 and 1987, eyewitness accounts of incidents such as Rourke's heroin problem and ejection from the band; Marr's surprise departure from the band and Morrissey and Joyce's efforts in its wake; Joyce's tales of ingesting psychotropic mushrooms just prior to auditioning for the band; and a brief, tantalizing look into a cardboard box of Joyce's at 56 cassettes of never released material and other such fodder is really quite interesting.

Of course with all band members still living the discussion of a reunion is inevitable. The filmmakers let much of the pro-reunion sentiment come out of the mouths out of incidental commentators, some wide-eyed scribe and a San Francisco street busker, although Joyce and Rourke aren't above mentioning that such an occurrence isn't out of the question. Even so, the yearning for a reformed Smiths comes off alternately as very naive or coldly calculated, depending on who's talking about it. Certainly Joyce and Rourke have much to gain from simply the possibility having currency among fans. Rourke sums up at one point, "I'm still kind of picking up the pieces, now, do you know what I mean? You know, I've been in a lot of different bands, but I suppose I'm still picking up the pieces from that day when The Smiths split up." Given reports that Morrissey turned down millions of dollars to participate in a reunion last year, the safe money is on no reunion. And with Morrissey turning out the best music of his post-Smiths life on his most recent set, The Ringleader Of The Tormentors, who can blame him?