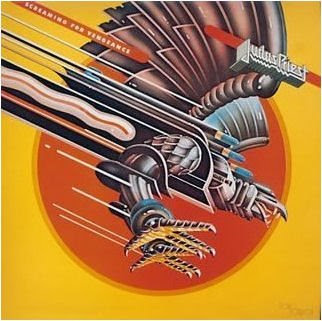 >> The first cassette we ever bought was Judas Priest's amazing 1982 fireball Screaming For Vengeance (not to be confused with this). We recall already being familiar with the storied British heavy metal act from our early and incessant exposure to MTV back when it was good and played music videos all day (and sometimes entire live concerts! Really! Its true!). But the truth is that at the ripe old age of eight we probably bought this tape because we thought the cover art was AWESOME (see left). According to Wired, the record is about to endure a more modern first: it will be the first full-length album sold through the online store associated with the video game rock band. Next up will be The Cars' self-titled set and The Pixies' Doolittle. The kids don't know what is about to hit them. The Wired piece downplays the distinction of Screaming For Vengeance being first, saying it was just how the proverbial cookie crumbled. But even so, we take a fair amount of pleasure imagining folks including our young cousins having their minds blown by the opening salvos "The Hellion" and "Electric Eye." Buy the whole enchilada from AmazonMP3 here. Anybody who has been paying attention will realize that the issuance of Screaming via "Rock Band" makes for a pretty canny promotion for the recently announced sixteenth Priest record, the double-album set Nostradamus, which Billboard reports will be released by SonyEpicMegaConglomMusicWidgetReplicatorAndMarketer June 17.

>> Texas shoegaze dynamos Ringo Deathstarr perform "Sweet Girl" live in a YouTube clip you can access here. We forgot to toggle down the volume on the video before commencing playback, but we imagine the bassy explosion that jumped through our headphones and caused our ears to ring just now was not unlike the onslaught the audience experienced during whatever show this was. Readers may recall that we reported last month here on the quartet's plans to record new material. We are hopeful that the planned sessions will yield a proper recording of "Your Town," a demo of which the band posted to its MySpace dojo at some point last year. Fortunately for you, we downloaded it while the getting was good. Check it out below.

>> The Johnny Foreigner-obsessed among you will note two interesting things about the virtual ad slick recreated in this recent MySpace bulletin from the Birmingham, England-based indie rock trio. One, there is a tiny rendering of what is clearly Lewes Herriot-crafted album art for the forthcoming set Waited Up 'til It Was Light. Two, and this is the particularly interesting item, the ad refers to the band's planned debut long-player as featuring the singles "Our Bipolar Friends," "Eyes Wide Terrified"... AND "Salt, Pepa and Spindarella." Don't think that third single has been disclosed elsewhere yet. The single for "Eyes Wide Terrified" streets at the end of May, and the album follows not long after in early June. When will the third single be released? We'll keep our eyes peeled.

>> Seriously, is there anything better than a Philly sports blog that interviews dudes from old hardcore bands about the City's teams? Choketown interviews here David Wagenschutz (Lifetime, Kid Dynamite, every band ever) about his love of the Flyers.
Posted by Unknown at 4/21/2008 09:32:00 PM