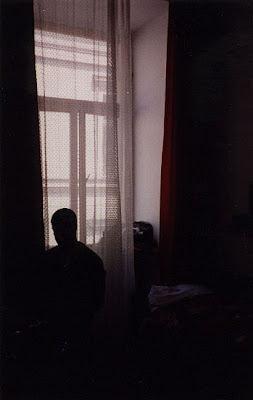 >> [Photo: The author, as shot by Watson, Cracow, 1997] In the 10 seconds it took us to rise from bed this morning and place ourselves under the shower head, some wiseguy on morning gabber "The Today Show" said the word "eastern;" we don't know if he was saying "Eastern Europe" or "Middle Eastern" or what. But what we do know is that immediately this Paper Cranes jam started playing in our head, and has been there most of the day. Right now we are attempting to exorcise it by listening to the track.

We can't recall where how this MP3 made its way to us, although there is metadata in the file indicating it must have come from AreYouFamiliar.Blogspot.com, which we don't recall ever reading and which hasn't posted an update since 2006. The mystery remains. As best we can tell the band is the same one you can find at this MySpace dojo, although we are not certain. If indeed it is them, The Paper Cranes' current material is decidedly more pop, less rough around the edges and spiky. But certainly worth a listen. But this one below is the jam, at least for frigid winter days, which of course is as far from the weather we have in Boston right now as it could get.

>> Indie punk geniuses Meneguar and freakier/jammier sister act Woods (it's not really a side project, it is really its own thing) have just disclosed some European tour dates that you can view here. None of the dates is in the UK, so we imagine somewhere right about now certain dudes in Johnny Foreigner are cursing their busy touring schedule and likely attendant inability to catch the tour as it wends its way from The Netherlands to the Czech Republic. Remember how awesome Meneguar's sophomore full length Strangers In Our House was? No? Here's a reminder.

>> Funny how we just mentioned electrotweesters Psapp the other day during our ramblings about the July Muxtape, and now today comes news that the British duo will be releasing a new record in October. The set, Psapp's third, is called The Camel's Back, and it will be out in the U.K. Oct. 27 and in the States the following week. Domino reissued the band's debut Tiger, My Friend, last November. It has the track "Curuncula" on it, which is divine, and so you should have that record. No word on which label will issue The Camel's Back, but it would not surprise us if it is Domino. Surprised we will not be. So there.

>> Clicky Clicky faves Mobius Band play a free hometown show this Sunday at Music Hall of Williamsburg in Brooklyn. The notable trio is slated to appear around 9PM at what is being billed as a Breeders afterparty. So presumably The Breeders are performing thereabouts that afternoon, perhaps at one of those free outdoor swimming pool dealies? Where's our New York correspondent when we need him/her/it. Mobius Band's sophomore set Heaven was issued last year and was one of our favorite records of 2007. Believe it or not, despite the band tirelessly touring Europe and the UK during the last year, Heaven has yet to be released in the UK. This will allegedly happen "soon." Ahh, soon. Anyway, remember this jam?

>> At least one reader out there likes to tease us about our affinity for the various bands of Ben Parker, including Superman Revenge Squad and the mighty Nosferatu D2. So for him, here is a link to a blog post from Mr. Parker indicating a Nosferatu D2 reunion of sorts is planned for a gig to take place on Parker's birthday. A few more details here.

>> We would have loved to hear Modest Mouse cover almost the entirety of Built To Spill's unparalleled There's Nothing Wrong With Love. Alas.
Posted by Unknown at 7/10/2008 09:33:00 PM

That Meneguar album is the best thing I've bought this year. It even tops the Johnny Foreigner record, but it's a pretty close run thing.