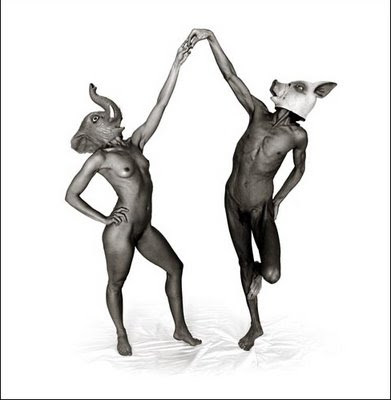 Not long after we got up to speed with Crooked Fingers (at the time of the release of Bring On The Snakes in 2001), the band began to background the electronics and loops that made the music so interesting to us. So, while we had very nice things to say about Crooked Fingers' Red Devil Dawn here in 2003, the ensuing releases from the Eric Bachmann-led project did not capture our imagination with the same intensity. But a recent renaissance of Mr. Bachmann's Barry Black records at :: clicky clicky :: headquarters -- as well as this recent video of Bachmann reworking his Archers Of Loaf classic "Web In Front" into a folk strummer -- renewed our interest in his contemporary work. So it was with no small amount of anticipation that we approached Forfeit/Fortune, Bachmann's fifth record (sixth if you count the excellent Reservoir Songs EP) under the Crooked Fingers banner.

The set was recorded in chunks in various locations across America, including Denver, Nashville and Tucson, and Forfeit/Fortune is overlaid with what would seem to be a corresponding variety of styles. The wall of sound that comprises the verse of album opener "What Never Comes" is underpinned with saxophones and keys; the overall effect is reminiscent of David Bowie's '80s catalog. "Give And Be Taken" may be Bachmann's funkiest composition. Bachmann does not even sing on the track "Luisa's Bones," which is driven by a dry drum machine track recalling earlier Crooked Fingers material. The clear album highlight is the soaring closing track "Your Control," a spirited duet between Bachmann and regular touring compadre Neko Case whose lyrics provide the title to Forfeit/Fortune. Bachmann says the track "almost sounds like New Order," and we definitely hear therein echoes of classic New Order tracks like "Your Silent Face" or "Age Of Consent." Of course, with Bachmann and Case's Buckingham/Nicks vocal rejoinders layered over the proceedings the Mancunian flavor is altered considerably. Even so, the song's airy synth strings and upbeat tempo give it an affecting, optimistic tone that will cause many to hit the repeat button.

Forfeit/Fortune will be released to select indie retailers and digital outlets tomorrow by Bachmann and his management Constant Artists' new imprint Red Pig/Constant Artists. In July Bachmann discussed the economics behind the decision to self-release the set in this Billboard article; he bluntly sums up in his press materials "It's not like 17 years in... big retailers are going to start giving a shit about Crooked Fingers." The act's previous record, 2005's Dignity And Shame, was released by Merge. You can watch the trailer for a DVD that comes with the deluxe edition of Forfeit/Fortune right here; the deluxe edition also carries "extended" artwork. An MP3 of the klezmer-tinged promo track "Phony Revolutions" is posted below to download. Crooked Fingers are on tour now supporting Okkervil River, and the remaining five weeks of dates are listed at the bottom of this item.