Hearda The Beatles? The greatest rock (or pop, depending on how much of a music nerd you are) band ever? The band whose name seems to always precede the words "and The Stones" when you are talking about music with non-music nerds? Whose music we used to listen to through the ceiling of our bedroom as a child as our brother spun the records upstairs? Anyway, in case you live under a rock, The Beatles (well, EMI) are selling from today remixed/remastered boxed collections of all of their studio albums in mono and stereo sets, as well as remixed/remastered versions of the individual albums. If you've followed the message board chatter as our Senior Writer Mike Piantigini has, you know that there has been talk of the box sets selling with such velocity during pre-orders that they are hard to come by. A message at Amazon.com Sunday morning read: "Important Beatles "Stereo Box Set" Availability Message -- We have sold out of our initial allocation of Beatles stereo box sets, but we will be receiving more inventory after release date. Sign up to be notified as soon as more stereo box sets are available. If you have already pre-ordered your stereo box set, you will receive your order." 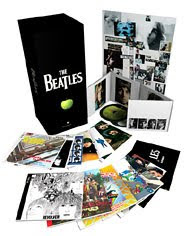 Anyhoozle, clearly we are NOT giving any box sets away. We don't even have them ourselves. But we are able to give away, through the largesse of the fine people at Cornerstone Promotions, a lithograph of the image posted above. It is not our favorite image of the band, but it's still cool to win, cool to feel the un-phony Beatlemania not having bitten the dust, and et cetera. Here's the deal: the first U.S. resident (sorry other people!) to email us at our address linked in the sidebar at right gets the litho. Plain and simple. We'll email the winner back, get your snail mail deets, and the folks at Cornerstone will ship the thing right to you. And then you can walk around with your head held high the rest of the day. [EDIT: We have a winner! Congrats to reader Deb!]
Posted by Unknown at 9/09/2009 12:01:00 AM

Email ThisBlogThis!Share to TwitterShare to FacebookShare to Pinterest
Labels: The Beatles, The Rolling Stones