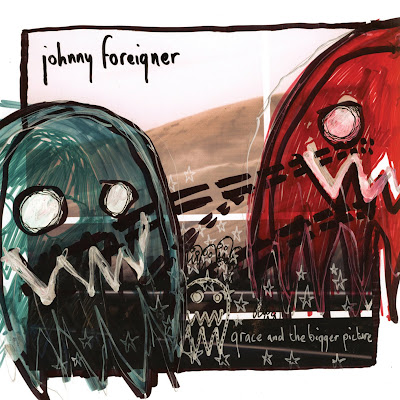 And it starts like this: as much as Johnny Foreigner's towering 2008 debut Waited Up Til It Was Light [review here] was concerned with the band's beloved hometown, the British noise-pop trio's wholly remarkable follow-up is crisply refracted through the band's absence from it. And, of course, guitarist Alexei Berrow, bassist Kelly Southern and drummer Junior Elvis Washington Laidley's separation from Birmingham, England's people and places (but mostly people -- after all, there are some love songs here, yeh?) that a life lived via van requires. This theme is no surprise: for more than a year singer and guitarist Berrow has been quoted in interviews saying that Johnny Foreigner's sophomore record would be about touring in a series of endless arcs that keep the band routinely deracinated. The resulting music isn't as dark and dour (or, of course, as painfully traditional) as, say, Bob Seger's "Turn The Page," but that doesn't make the aches less real -- or the joy at all forced, for that matter. Grace And The Bigger Picture is pointedly heartfelt, jubilantly aggressive, road-weary and resigned all at once. The record is populated with wistful ideals of home ("we'll throw parties in the yard") and amazing letdowns ("all we have is miles and wires and all I am is calls tomorrow"), but there are also wonderfully carefree moments, as in the almost blindingly brief "Kingston Called, They Want Their Lost Youth Back."

In the months leading up to the release of Grace And The Bigger Picture it seemed the collection's likely focal points -- and obvious picks for beginning and ending tracks -- would be "Feels Like Summer" and "The Coast Was Always Clear," respectively. It turns out, however, that Grace And The Bigger Picture rotates on an axis that is the stunning "More Heart, Less Tongue," a ballad in the center slot of the running order that describes a frustrating long-distance relationship. The track, paired with its B. Fleischmann-esque echo "More Tongue, Less Heart," provides as neat a summary as can be had of the otherwise scrambling and raucous Grace And The Bigger Picture. We'd be shocked if "More Heart, Less Tongue" was not selected as a single from the set, although the track faces formidable competition from the amazing closer "The Coast Was Always Clear," the jangle-spazz winner "Dark Harbourzz," and even the re-recorded version of "Rhapsidy/This Trapeze Ball Thought Out," which now touts an irresistable drum 'n' bass low-end, a dazzling 8-bitty, weird delay on the guitar in the verse, and of course the new title "Every Cloakroom Ever." It is worth returning one's attention briefly to "The Coast Was Always Clear" to note that the goose-bump inducing denouement that buoys the lyrics "he's half asleep for you" may well be the band's finest recorded moment.

For a 16-song set (the hidden track at the end of the album this time around is, as Mr. Berrow promised, the wonderfully affecting, American Football-esque ballad "Close"), Grace And The Bigger Picture is breathlessly short. Listeners are not afforded a moment to relax prior to the calm commencement of track five, "I'llchoosemysideandshutup, alright." As with "Every Cloakroom Ever," "I'llchoosemysideandshutup, alright" begins as a ballad sung by Ms. Southern. This, of course, does not last, although the remaining section of the latter is delivered at such a velocity (consistent with its mate "Choose Yr Side And Shut Up!") that the entire thing serves mostly as a lively lead-in to the thoroughly exceptional "Criminals," which will be issued as a single in the U.K. 12 Oct. with the non-album b-sides "Things We Should Have Left On The Beach" and "Palace Fires."

Grace is painstakingly crafted, deeply layered, and hangs together as a collection more firmly than even its ambitious predecessor. The narratives sparkle like dizzying mosaics comprised of thousands of digital snapshots. Themes appear and re-appear, e.g. the clarion call "some summers!" in "Feels Like Summer" resurfaces in "The Coast Was Always Clear;" "More Heart, Less Tongue" is transmogrified into "More Tongue, Less Heart;" the breakdown to "Custom Scenes And The Parties That Make Them" even repurposes the breakdown from the band's break-out single "Eyes Wide Terrified;" and keen ears seem to hear the familiar cry of "Amateur! Historian! shouted in the closing moments of the squalling anthem "Dark Harbourzz." But even more impressive than the whole are the parts, as there is a remarkable compositional cleverness in certain of the songs that points to an ever sharpening songcraft among Berrow and company. This is no more apparent than within the almost linear, structure-flouting gem "Custom Scenes And The Parties That Make Them." We've read that a video was shot for the song, so it wouldn't surprise us if "Custom Scenes..." will also be selected as a single from Grace And The Bigger Picture. Best Before Records releases the record 26 Oct. in the U.K. Late word is that a special edition of the set will include a DVD of a live set recently filmed in London.