Review: Dananananaykroyd | There Is A Way [album stream] 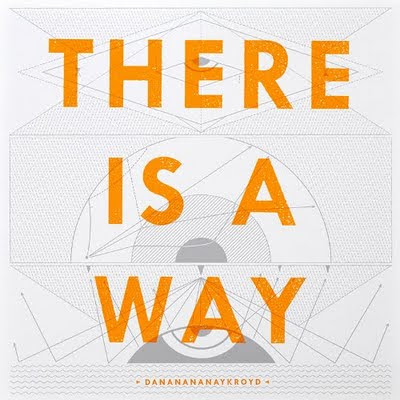 Brash, fiery, overdriven and weird, Dananananaykroyd's sophomore full-length brilliantly capitalizes on the Glaswegian sextet's strengths. The exuberant aggro-pop is here (the early promo song "Muscle Memory" would actually chart, if the world were just), the ludicrously energetic performances are here, and Ross Robinson's production is as perfectly realized as we could have hoped. Hyperactive as ever and not afraid to take unhinged vocals directly to 11, Dananananaykroyd somehow also sounds particularly focused on There Is A Way. Whether that is a product of the soul-searching that led to the band's recent independence (it left Best Before Records after the release of its debut Hey Everyone! and this new collection was released on the band's new label Pizza College), or the influence of Mr. Robinson, really doesn't matter.

What matters is the pop-leaning material ("Reboot," "Muscle Memory") explodes with the sort of energy that we would more readily ascribe to Metallica's Kill 'Em All. When Dananananaykroyd gets heavy the delivery is pleasurably brutal (as in the Fugazi-in-space brawler "All Us Authors"). There Is A Way is not all about the attack and weight, however: the six lads have some new tricks up their sleeves as well, which becomes apparent as soon as the band launches into the surprisingly potent, whipsaw funk of "Think & Feel." The tune not only adds a degree of rhythmic swing (and the pre-chorus that begins at :30 zanily includes the lyrics "Dananananana, Dananananana" -- we love when bands slyly reference themselves), but the band notably expands its sonic palate by incorporating dense, chaotic, skronking horns in the close. Elsewhere, the final 20 seconds of "Apostrophe" beautifully swirl away from the triumphant last lyric into a pool of feedback. Opener "Reboot" commences with a piano chord before being overtaken by a motorik rhythm.

The performances and Mr. Robinson's production are precise; even Mr. Robinson's addition of new sonic dimensions (via reverbed elements in the higher octaves, skull-beating drums and generally crispy crunchy guitar ju-jitsu) to Dananananaykroyd's characteristic sound adds clarity, not clutter. We must admit being a bit anxious to hear what Mr. Robinson would do with Dananananaykroyd, as we expressed here in April. On the one hand, the so-called "Godfather of Nu Metal" had worked on that one really flat-sounding recent The Cure record; but on the other hand he had produced At The Drive-In's legendary Relationship Of Command LP. Fortunately for everyone involved, There Is A Way is beautifully rendered and more readily favors the latter; it's hard to consider the record anything other than an unqualified success. There Is A Way was released June 13 and you can buy it in various formats from the band right here. The band's prior full length Hey Everyone! was one of our favorite records of 2009. Dananananaykroyd is currently neck-deep in the UK summer festival circuit, and in the fall it embarks on a UK tour; full tour dates are listed here.

Email ThisBlogThis!Share to TwitterShare to FacebookShare to Pinterest
Labels: At The Drive-In, Dananananaykroyd, The Cure