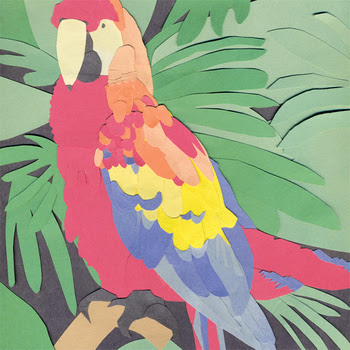 Top 10 of 2011, easy. The explosive joy, kaleidoscopic melodies and desperate energy that are the musical hallmark of Philadelphia-based contemporary emo superheroes Algernon Cadwallader tethers the trio's magical sophomore set Parrot Flies to a familiar musical center. The evergreen nature of these core components make for reliable building blocks; while many acts cut figurative corners and compose crap with figurative straw or sticks, Algernon Cadwallader's shit is constructed with brick, built to last. That the core components of the band's sound were first forged by superlative second-wave emo standard-bearers Cap'n Jazz doesn't matter. In fact, that the band is DIY from end-to-end (from the Facebook page: "Pete makes the t-shirt designs. We print all the shirts in our warehouse. Joe records and mixes all the music in his studio. We book our own tours. Tank does his own stand up comedy. Peter, Craig, and friends put out our records.") -- while interesting -- isn't even relevant, except to mass media pubs that still find it remarkable that bands and scenes can take care of themselves. No, what is paramount is the songs, and Parrot Flies' 11 songs represent an embarrassment of aural riches.

Which is a couple hundred words too many that aim to underscore the simple point that Algernon Cadwallader's new collection is uniformly thrilling. Sure, the adenoidal screaming, continually refracting guitars and propulsive rhythms aren't surprising at this point, but that aforementioned familarity subtracts nothing from the rush and push that Algernon Cadwallader reliably conjure on every song. A listener can literally drop a needle anywhere within Parrot Flies' 30-ish minutes and hit sex, from the characteristically raw, up-tempo mid-album fireball "Glenwood Ave" to the blindingly brilliant album closer "Cruisin'." The production has its occasional subtleties -- synth buried in the right channel of blitzkrieg opener "Springing Leaks," the different bits of percussion that surface throughout "Sad" -- but none of the appointments weighs down the live feel and engaging dynamism of the performances. Parrot Flies sounds real, like it's happening right now; it will probably always sound that way.

Oxford, England-based Big Scary Monsters offically releases Parrot Flies Aug. 22 on CD and limited edition vinyl in the UK and Europe. Algernon Cadwallader self-released the collection domestically on its own Hot Green imprint, although until the threesome returns from its current four-week tour of the UK and Europe the band recommends ordering the CD from No Idea, Rorschach or Vinyl Junkie. A domestic vinyl release is planned, according to this blog post. As of late July BSM had nearly sold out of all 200 of its blue vinyl LPs, although some number of the 300 black vinyl discs remain available -- at least as of about a week ago. Algernon Cadwallader's terrific, breathless debut full-length Some Kind Of Cadwallader was released in 2008