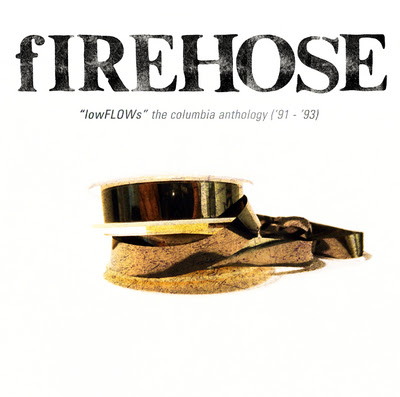 Somewhere in a Massachusetts landfill there's a calendar with the words "Mighty Fuckin' Hose of Fire" written on a then-upcoming 1992 date where a stop on fIREHOSE's Flyin' The Flannel tour was due at Boston's Paradise. Such was the excitement of my college radio/college band/college leisure time cohort. Their live shows raged - explosive displays of virtuosic exploitations of punk rock basics exploded into bewildering free jazz riffing and half-spoken lyrics.

So is it time for a critical reassessment reaffirmation of fIREHOSE? Hell, yeah it is. To the rescue is the occasion of the just-released "lowFLOWs" the Columbia anthology ('91 - '93), a compilation of the whole of the band's pair of major label albums (the last of their output), Flyin' The Flannel and Mr. Machinery Operator, along with some crucial period EP, b-side, and compilation tracks, live and studio, and the band's first tour dates in nearly two decades.

In the years since the band broke up, it's bassist Mike Watt and drummer Ed Hurley's earlier band the Minutemen who get all the books (Michael Azzerad, who contributes the liner notes to the collection, took the title of his seminal Our Band Could Be Your Life from a Minutemen lyric), and film documentaries (the also crucial "We Jam Econo"). I'm not going to say it's not justified - the Minutemen were groundbreakers, for sure - but, hey, let's not forget about fIREHOSE.

Legend has it Ohio's Ed Crawford (later known as Ed fROMOHIO) showed up at Mike Watt's San Pedro, CA home in 1986 in an effort to drag Watt out of the depression over the death of his best friend and Minutemen partner d. Boon and back into the music that so clearly defines his life. It seems like we all - Watt included - owe him a lot of credit for his persistence. Crawford's more straightforward songwriting and power chords made a great foil for some of Watt's less rock material and his power-chorded guitar playing gave fIREHOSE a bigger, tougher sound. Their three albums on SST - Ragin', Full On (1986), If'n (1987), and fROMOHIO (1989) - are as important to a generation as Double Nickels on the Dime was to the generation prior and it further spread the Minutemen's legacy in the process.

Getting short-shrift, then, are the albums they made after jumping to major label Columbia in 1991 just at the dawn of the Nirvana era of the mainstreaming of "college rock." Upon retroactive re-inspection, '91's Flyin' the Flannel and '93's Mr. Machinery Operator show an interesting evolution of their sound - some of it simply due to an apparently bigger recording budget. Flannel's opening declaration "Down With The Bass" still sounds bigger and bolder than anything that came before. From there, the highlights on that one pile up: the toe-tapping "Can't Believe," their arguably definitive version of Daniel Johnston's "Walking The Cow" (though I still go for the chord organ and boom-box original myself), the driving "O'er the Town of Pedro," and the classically Crawfordian "Lost Colors."

Swan song Mr. Machinery Operator is an even bigger surprise. Produced by J. Mascis, it crackles with a new immediacy. The guitars are bigger and there're more of them - including guest spots by Mascis, Nels Cline, and Superchunk's Mac Macaughan. And there's that distinct Mascis' distinct drum sound - along with a backing vocal by him - that becomes especially prominent as the album settles into track 2, "Blaze." That one, and another one of Crawford's, "Witness," are as good as anything they ever did. Watt tracks like "Herded Into Pools" and "Disciples of the 3-Way" seem to hint at the type of stuff he would do as his solo career got going. Is it as important as If'n or Double Nickels? Of course not, but it's a hell of a lot better than its reputation and deserves the second look this set affords.

The remastering of these albums already recommends the set, and the stray compilation tracks and unreleased live tracks are great to have as well, but the appending of the long out-of-print 1992 Live Totem Pole EP makes it truly indispensable. Recorded live in LA the year before, the 7 tracks - mostly covers - are a worthy testament to their explosive live act. There's not too many bands covering Blue Oyster Cult, Superchunk, Butthole Surfers, and Public Enemy in one show, but here they are. West Coasters are getting to see that all again right now (and judging by the postings on the Internet Archive, it's going quite well). Here's hoping I'll be able to pencil the "Mighty Fuckin' Hose of Fire" on my calendar again soon.

And where have they been all my life since? Bassist Mike Watt (no less a legend now as then), master of the spiel and thudstaff, continues to be an inspiration and a creative force, most recently of his latest "punk-rock opera," Hyphenated-Man among many other projects including membership in The Stooges. Crawford and Hurley haven't exactly been absent from the music world, but they've certainly spent most of the intervening years in support roles, like Crawford's stint in Whiskeytown and Hurley's in Red Krayola. I'm especially excited to learn that in Pittsburgh, Ed Crawford, joined by Gumball's Eric Vermillion and The Cynics' Mike Quinlan, have put together a new band called FOOD. Their first release, the EP Four Pieces From Candyland (3 or 4 songs, depending on the format) is imminent on Phatry Records. Lead track "Santa Maria" is a dynamite, charging rocker that settles into a chiming guitar groove, "Jesus and Johnny Cash" is a country stomper, while ballad "You Don't Know" would've sounded at home on either of the fIREHOSE albums collected above. Bonus track "Like A Leaf In The Wind" (the CD has 3 tracks, the digital version - including the one included with the 7" vinyl includes this 4th track), sounds just like classic alt-rock that would sounded right at home coming from our college radio station through our cheap boom box at the aforementioned college apartment. Whether or not the fIREHOSE reunion turns into a regular thing, a Crawford-led band is a good thing to have back.