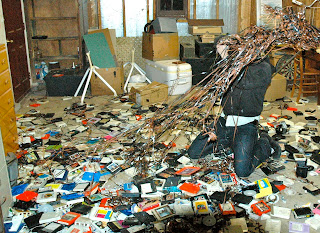 Have you heard that awesome record that came out last week from that band from Baltimore? The album that should warrant consideration as one of the best of the year once 2012 burns itself out? No, not that one -- this one: Typo Magic, the debut long player from Charm City indie rockers Golden Gurls. The surname-less threesome (Andy on guitar and vocals; Donald on drums; Jesse on bass) have crafted a record that is to date the most satisfying and pure indie rock collection of the year. It's all killer, no filler, packed from front to back with stirring, bigmuff superfuzz guitar anthems.


Typo Magic is also something of a throwback to records of decades past, in that it eschews faddish gimcrackery  -- indeed, it even eschews guitar solos -- in favor of elements that have fortified the underground since the best albums were coming out on Homestead or SST: songwriting, sentiment and bountiful guitar distortion. Golden Gurls employ alternately snarling and whispering guitars to articulate well-developed melodies and to overdrive soaring crescendos; it's the attack of Dinosaur Jr. paired with the pop sensibility of Normal Years-era Built To Spill. Vocals throughout ride under the swell of the guitars, and Gurls fronter Andy murmurs in a manner that recalls the reserve of Seam's Soo Young Park or Notwist's Markus Acher.

Typo Magic features songs front-loaded with hooks, from the gentle strumming that opens the album ("Kid Tested") to the percolating bounce of the verses to "I Can See The City From Here." The record is not all fireball guitars, as there is a fair amount of texture evidenced by weightless, tremeloed guitar in the verse of the downtempo "Cars On Mars," or the spiraling harmonics in "Tidal" (which harmonics, incidentally, echo what is arguably The Wrens' finest moment). Highlights abound, but it's worth pointing out one of the strongest tracks, the yearning rocker "Excited," is tucked away toward the end of the set. The tune -- which sounds like a slightly milder restating of Projekt A-ko's "Xavier" -- lays on thick guitar swirl and features a particularly delicate vocal that play counterpoint to strident snare cracks. The proceedings close with "Shasta Masta" and its almost archetypal indie rock lyric -- no less poignant as delivered here -- "just when I thought I had it all figured out... for once..."

While Typo Magic is almost disappointingly concise, Golden Gurls' brevity gives the record a substantial degree of punch. The album features six songs lasting fewer than three minutes and only one surpassing four. Compact compositions captured via energetic performances give the record a palpable electricity and immediacy of the type that inspires repeated listens. And one further note: we think it says something about how perfect a fit Golden Gurls' music is for this blog that two musicians we respect from completely different U.S. cities took time out to recommend Typo Magic to us before it was even released. Maybe we're just that predictable, but we know what we like and we like this record a lot. Typo Magic would seem to open a portal to a period in late-'80s/early '90s indie rock that we hope never closes. The album was self-released by the band May 1; order the collection right here.

theyre called golden curls but the website is screwed up

theyre called golden curls but the website is screwed up