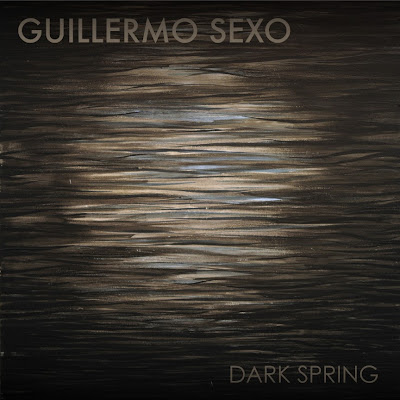 ​​Back In Black is AC/DC's eighth record. Moving Pictures is Rush's ninth. Invisible Touch, whatever you might think of it, is Genesis' SEVENTEENTH record. We list these not because of their massive commercial success, but as evidence that the best acts keep getting better, so long as they have what they need to make it work. And as evidence, we suppose, that there was once something called the record industry, and it sometimes engaged in something called artist development. Those days would seem to be long gone, so we're not sure what it is, exactly, that sustains veteran Boston indie rockers Guillermo Sexo, who release a ​mesmerizing full-length titled Dark Spring next week.​ Whatever it is, the quintet's new collection -- its fifth, and first for the venerable Midriff label -- is plainly Guillermo Sexo's magnum opus. It doesn't markedly alter the alchemy that resulted in their fantastic fourth record Secret Wild; instead Dark Spring is simply both bigger and deffer than its predecessor. And with the present ascendancy of Massachusetts indie rock in to the national consciousness, all signs indicate that Guillermo Sexo's time is now.

As did Secret Wild, Dark Spring fully embraces both bewitching, vintage English-styled folk sounds and gigantic, swirling, guitar-pop creations. This year's model, however, benefited from a longer, more thoughtful gestation, as the band told Vanyaland recently. And the results are astonishing. The centerpiece of the collection is the hypnotic and epic exploration "Meow Metal," a seven-minute song stacked with guitars, a prominent synth line, airy vocals and a bash-n-pop rhythm. Perhaps more than any other track, long-time collaborating engineer Justin Pizzoferrato's work here gives listeners the sense that Guillermo Sexo is not just playing their instruments to make the recording, but rather they are using their instruments to play the entire studio space itself. "Meow Metal" leads into the pastoral, serene ballad "Moonlit Sparrows," which in turn points to the bracing anthem "Fall Lens." There is not just stylistic variety among the songs on this record, there's also substantial variance in the length of the compositions across the set. That variance enhances an apparent narrative quality to Dark Spring: it really feels like a journey out of classic literature. That feeling is enhanced by titles such as the Tolkien-referencing, waltz-timed album closer "Shadowfax," but even more so by singer Noell Dorsey's mystical, other-worldly vocal performances and Mr. Bettsak's arrays of guitars that alternately shimmer and lacerate.

Dark Spring is the band's fifth record in seven years, proof that Guillermo Sexo (and specifically guitarist Reuben Bettsak, who issues a steady stream of demos to his Soundcloud and also plays in Future Carnivores, another Boston act) are remarkably prolific​. ​How many Boston indie rock acts have even been around long enough to have written, recorded and released five records? Better question: how many have been good enough to have warranted a catalog five albums deep? We certainly count Guillermo Sexo among that number, particularly in light of this new, next-level effort. Midriff releases Dark Spring Tuesday as a CD and digital download; a vinyl release is to follow shortly. You can pre-order the digital version via ITunes right here. Dark Spring will be feted both with a listening party Sunday night at Zuzu in Cambridge, Mass., and with a heavily anticipated record release show at Middle East Sept. 29, also in Cambridge. Whet your whistle by streaming the entire record via the Soundcloud embed below.