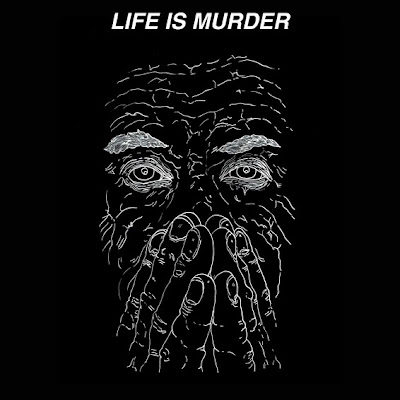 Lately Exploding In Sound Records seems to be exclusively in the business of releasing classics. During a summer that saw Boston's humble scene get hoisted by the collar up into the spotlight -- due in large part to a breakout record from a certain Western Mass.-based former signee -- the Brooklyn-based label was never far from the conversation. We like to think Pile's very rad Dripping LP -- a late 2012 EIS release -- was instrumental in setting the gears in motion for this year's ascendance of Massachusetts indie rock. Now EIS has yet another barnburner on its hands, the sophomore full length (but "proper studio" debut) from Boston punks Kal Marks, titled Life Is Murder. The collection sees the six-year-old trio turning away from the more surfy and jangly vibrations of its 2011 debut Goodbye Horses and doubling down on a darker, grittier sound.

The title of the new record is a bit of a bait-and-switch. Fans looking for a self-serious slog concerning mortality -- and fans unaware that a terrific 2012 Kal Marks cassette was called Piss Of The Century -- will be disappointed. In fact, Life Is Murder may be one of the funniest records you'll hear this year. To whit: in the title cut fronter Carl Shane detachedly sings of self-pleasure from inside a maelstrom of massive, grungy riffing, drily observing that "a reach-around in jail" is better than being alone. Mr. Shane bends and drags his unique, amphibious voice through Life Is Murder's nine tracks, modulating his attack between piercing and poignant in time to the band's shifting arrangement of sinewy guitar, bludgeoning bass and clattering drums. Setting his whip-smart lyrical shenanigans against the trio's borderline sludge establishes a tension that keeps the LP engrossing straight through to the spine-tingling climax of the titanic closer "Out In The Deep." There, Shane's unhinged prophesying "...and you're too busy getting high, all the time... and I will fall from a great height..." manifests as deliberate, emotional gut punches.

While Shane and his cohort have taken a daringly reductive approach to its music, the trio is too smart and inventive to be boring. Indeed, it's hard to track the trajectory of many of these songs, as most end somewhere far from where they start. "Where A River Starts And Ends" presents as a lightly picked lullaby, then fluidly transforms into a grinding, distortion-caked stomper before coming to rest upon a rolling drumbeat that echoes Modest Mouse circa Lonesome Crowded West. Opener "Love Is A Song... Not An Answer" commences with 33 seconds of feedback, piano and ambient noise before launching into a weighty, rhythmic stomp and steadily ascending and descending riffage. Life Is Murder is a split release between three different labels; joining EIS in doing the honors is Sophomore Lounge and Midnight Werewolf. A cut from the record is available for streaming via the Bandcamp embed below, and Life Is Murder can be pre-ordered directly from Kal Marks right here. Finally, the band embarks on an ambitious U.S. tour Thursday: it begins with a show at Bard College and then presses on for an additional three weeks before Kal Marks plays a homecoming show in Cambridge Oct. 12. The full tour dates are at the very bottom of this item. -- Dillon Riley