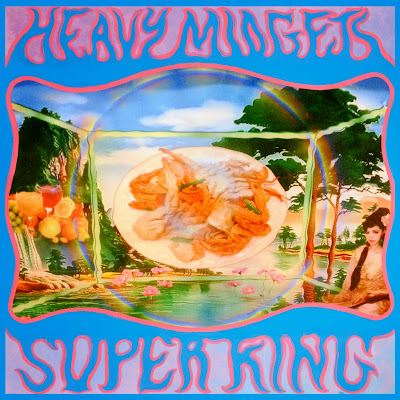 We've witnessed countless record promotion tactics over the years,* but none is as pleasurable for fans presently as what could be construed as anti-promotion: the sudden and unannounced album drop. It's been famously done recently by Beyoncé and, a year ago, by My Bloody Valentine, among many others. With almost every aspect of our largely mundane lives memorialized in the infinite sea of data soup that is the Internet, these days real surprises -- hell, even real experiences -- are hard to come by. Richmond quartet Heavy Midgets made life a little more real early this month when it delivered a tingly eureka moment of its own in the form of their stellar first full length Super King. The set was posted to Bandcamp without warning, and the songs contained therein just as abruptly emerged from the foursome's former furrow of lo-fi haze into sharp resolution, carrying with them a renewed and impressive ethos expressed in terms of complex, DIY guitar pop.

The beautifully realized collection impresses with its range and routinely inspired songwriting, which seems to draw from influences as disparate as Aftermath-era Rolling Stones and modern San Francisco art-punk. Super King leads with its best pop song, "Nothing New," a showcase for Heavy Midgets' signature sour guitar dynamics, skittish rhythms, and rich, driving vocal work from one of the band's four singers. Charlanne McCarthy's wonderful vocals echo the affecting, lower-register of Stereolab's Laetitia Sadier, but do so with a bracing punk vigor. The song abandons its verse-chorus structure after introducing a bristling bridge of serrated guitars whose experimental edge will sound familiar to fans of Deerhoof or math-mod rockers Welcome. The dazzle of "Nothing New" persists with notable guitar interplay and, eventually, theremin. "Daylight Savings" follows, and brings with it some surf-punk charm and the telling lyric "some of us won't even survive daylight savings."

Thereafter, the album showcases in turn each of the singers and songwriters within Heavy Midgets. The male voices propound harder-edged approaches within shorter, faster frameworks. "Furry Thing" touts a darker, more reverberated menace, while "Wedding/Bedding" alternates spoken passages and sweetly sung melodies alongside inventive and engaging xylophone. The heaviest impression is left by the sunny pop moves of "Dynasty;" indeed, one might consider it the "Divine Hammer" of Super King -- a bubbling, carefree track that closes with a loud, distorted power chord section and guitar solos that call to mind vintage Weezer and Built To Spill.

With Super King, Heavy Midgets deliver one of 2014's first truly interesting guitar records. Every song transcends their familiar elements to reveal creative and singular compositions welling with both grit and clarity in satisfying proportions. Richmond has made its name in recent years on creative guitar bands, and this crew, as well as the folks at Bad Grrrl Records, can be considered among the vanguard. Super King is available as a digital download now, and will be issued on cassette by Bad Grrrl Jan. 30. That same day Heavy Midgets play a release show at Richmond's Gallery 5, with support from New Turks, Spandrel and Malatese; full deets here. Bad Girl released in 2012 Heavy Midgets' previous effort, a split with scenemates Tungs that we wrote about right here. -- Edward Charlton