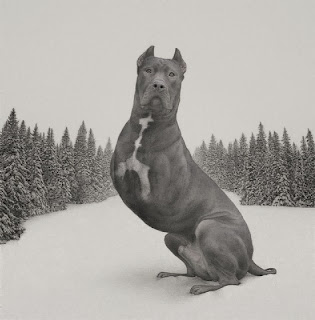 Beautiful and barely there, the recently issued full-length debut from New Dog is spectral and mesmerizing. The project is the latest from Anar Badalov, he formerly of Boston's defunct Travels as well as erstwhile Baltimore slowcore duo Metal Hearts. Lost Weekend is quiet but markedly restless, tense but delicate. The title Lost Weekend suggests to students of rock music a blurry bacchanal (the phrase was used by John Lennon to describe a messy period, although the legend has since been dialed back), but that's not what we have here. One could speculate that the fact that Mr. Badalov now practices his craft under his own shingle (as opposed to working with a partner) inspired the title (or, for that matter, the name New Dog). Whatever the motivation, the collection is profoundly evocative and artistically quite successful, evidence that Badalov's skill as a songwriter has only strengthened since going it alone.

The imaginatively rendered music regularly deviates from traditional pop structure, and instead uses Badalov's light, almost avian guitar work -- at times minimal and others kaleidoscopic -- as an anchor around which snatches of traditional melodies, minimalist repetition and folk structures confidently assert themselves, as in the album highlight "Shyness." Occasional piano lines twinkle and burn out like dead stars, persisting just long enough to hint at blues and Classical forms before drifting out of certain compositions like so many ghost ships. Opener "Smoking In The Living Room" almost defiantly hovers, held aloft by busy ripples of finger-picked guitar and then neatly pulled into the abyss by a cycled strand of notes from a piano. The clean guitar tones and broad expanses of space within "TV Islands" recalls the quiet beauty of The Softies' 1995 LP It's Love. When they appear at all, electronic beats convey unease, as do the crumbling electronic kicks and crashes in "Dog Bite." A spidery, noir cover of Richard Hell & The Voidoids' "I'm Your Man" bobs and whispers, excising the original's laddish bravado and specifically the chorus's bouncy, bar-room chant. Instead, when Badalov quietly repeats and repeats the title, he is coming from a darker, almost threatening place; the jaunty piano solo is doubly creepy given the context. There is nothing creepy, however, about the sincere, sweet and sad album closer, "Leave Nothing For Tomorrow." The poignant and understated ballad's air of finality makes it a powerful close to Lost Weekend, which, incidentally, we first wrote about here in July.

New Dog makes its live debut next week at Act Cube, a space in MIT's List Visual Arts Center, when it plays a record release show Jan. 9 as part of the Institute's Ampersand concert series. The event is open to the public and tickets are cheap; click this link to purchases or consume more information, and here is a Faceook event page. Badalov takes New Dog to Europe next month, charting a circuitous tour around the continent that begins and ends in Belgium and includes a number of stops in France, Germany, Czech Republic and Switzerland; peruse the full itinerary right here. For the live dates, Badalov will get an assist from guitarist and keyboardist James Lynch, which should allow a lot of the important textures of Lost Weekend to be recreated for the audience. The record is presently available as a CD and digital download; stream selections from the album via the Bandcamp embed below and then click through to purchase. Not to put too fine a point on it, but if we had done a Top 20 albums list instead of a Top 10 for 2013, Lost Weekend certainly would have made the list.