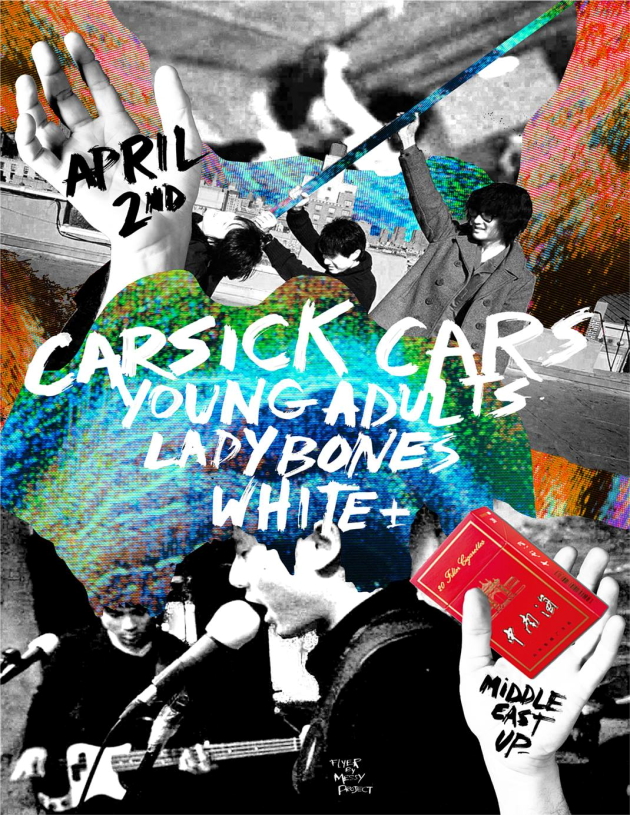 You look like you're just back-and-forth to China all the time. No? Not regularly shelling out $1,200 to hop astride an Air Canada jet for 17 hours en route to Beijing via Toronto for long weekends of rock and roll music? No? Well, even if that were the case, the place to be Wednesday night this week is Cambridge, MA, as Chinese indie rock titans Carsick Cars will perform an extremely rare area show at the Middle East. The act is supporting its tremendous, Sonic Boom- and Hamish Kilgour-produced new full-length 3, which wields infinite jangle and profound motorik vibrations in equal, visceral measure. The rich, technicolor set was released by Maybe Mars at the end of February, and we've embedded a stream of same below, but a warning: 3 will take hold of you. Hotly tipped, trend-shaping "China Wave" trio Carsick Cars rocks from atop a bill that also includes local noise pop heroes Young Adults, Ladybones, and the Carsick Cars side project White +. Wednesday night, China comes to you, and you'd be foolhardy to miss such an opportunity. Foolhardy, madam.

Doubly foolhardy, we'd say, because not only is China's biggest indie rock act performing, but the rumor is that this show will be one of the last two played EVER by Boston noise-punks Young Adults. We don't know what is behind the purported demise of the band, but we do know that fans of the static blasters will kick themselves for not seizing on one of the final opportunities to witness Young Adults arcing toward its distinct and lofty aural nirvana. Last we heard from YA, the trio had recorded a short set of tracks at the recently installed Converse Rubber Tracks jawn late last year. We're very hopeful that music sees the light of day before the band checks out. For now, all of the threesome's music is now available for free at their Bandcamp yert right here, and we've taken the liberty of embedding the face-scraping EP Born In '91 below. Under that you will find streams of tunes from the other acts on the bill, which we certainly recommend to your attention. Full details regarding Wednesday's show are discernible via this Facebook event page, and as of press time it appears there are still tickets available, which is sort of insane if you think about it, but maybe you weren't thinking about it, which is one reason why we thought we'd best think about it for you. Now go get 'em, tiger.