Review: Johnny Foreigner | You Can Do Better 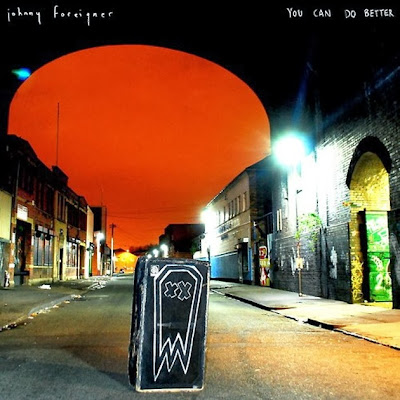 "Last night you told me: tomorrow we shall have to think up signs, sketch a landscape, fabricate a plan on the double page of day and paper. Tomorrow, we shall have to invent, once more, the reality of this world." -- O. Paz, trans. E. Bishop, Jan. 1, 1975

The blunder many may make when it comes to Johnny Foreigner's brilliant new long-player You Can Do Better is to consider it only in terms of what it is not, instead of the glorious what that it is. The Birmingham, England-based noise pop legends' prior record, the titanic, immersive third LP Johnny Foreigner Vs. Everything, casts a gigantic shadow, to be sure, and birthing that one, according to a recent interview, substantially sapped chief songwriter Alexei Berrow's creative energies for months ("Tbh I spent a good 6 months not wanting to admit I didn't want another record," Mr. Berrow told GoldFlakePaint). And just as Vs. Everything became an obstacle for Berrow, something similar could conceivably befall fans, whose brows perhaps furrowed with the announcement of the new collection as they pondered just how Johnny Foreigner could possibly top itself. It's wrong-headed thinking. The fact is that the band's fourth record You Can Do Better is a powerful, diabolically catchy set, a compact firecracker of a record that ably and convincingly delivers the band's intelligent brand of bash and pop. The music is as dramatic and as emotionally vital as ever. The Brummies have stared down the challenge of its own album title.

You Can Do Better is packed with bracing guitar anthems. Opener "Shipping" bursts into being with careening guitar and thunder from the rhythm section, smoothly interpolates quiet reflection, and then surrenders to a boisterous pre-chorus. "Le Sigh," which leads a parade of tunes that each could be standout singles, touts blissful feedback, engaging vocal harmonies, and no small amount of shouting. A fully realized version of the crushing, meditative ballad "Riff Glitchard," which appeared in a more skeletal form on last year's Manhattan Projects EP, breaks the pace of the new collection. Its helpless lyric "I might as well be an organ in your body, the damage I do, when I do nothing," is even more beautifully rendered here by bassist Kelly Southern, whose voice takes center stage more often on You Can Do Better than ever before. The last half of the record breathlessly blows by, from the blinding "Stop Talking About Ghosts" and its desperate revelation ("the hardest part is letting go"), to the lethal hooks of "Wifi Beach," upon whose lyric the album's fixation with an imaginary, dream-like metropolis turns, and through to the thrumming, majestic and self-aware closer "Devastator."

Rather than casting a shadow, one aspect of Vs. Everything actually illuminates You Can Do Better: the alternate universe / timeline / reality. The subject drove a substantial portion of the narrative to the former LP, and particularly its transcendent ballad "Alternate Timelines Piling Up." And, in a way, Berrow manifested just such an alternate reality in retooling his songwriting post-Everything for the band's new four-piece configuration (second guitarist/master propagandist Lewes Herriot officially joined the band after the recording of the third LP). Something about that change fired his imagination, and allowed it to escape the insatiable gravity of Vs. Everything. The result is a loud, clever and entirely thrilling noise-pop album, one that ironically echoes not the oft-cited prior record, but the band's aggressive and ambitious first LP, Waited Up Til It Was Light. In essence, and via a not small amount of mental jiu jitsu on the part of Berrow (again, to GoldFlakePaint: "I guess the simple answer is that I lied. In as much as an actor or author lies. I created like, an alternate universe me, that could make decisions and do whatever I told him to in order to reveal greater truths."), Johnny Foreigner has been reborn as a better version of a younger collective self.

You Can Do Better will be released by Johnny Foreigner's longtime label, Oxford, England's Alcopop! Records, Monday in the UK. There is as yet no public plan to release the collection in the U.S., but what Alcopop! is offering is, as always, very hard to beat: You Can Do Better is available as a 12" LP, CD or digital download, and depending on how fast one acts additional premiums include sparkle vinyl and a poster-size map of an imaginary metropolis that is apparently central to the record. There's probably even other stuff that we forgot; click through to the Alcopop! store to apprise yourself of your full slate of commerce options. Johnny Foreigner's You Can Do Better tour of the UK begins March 13. The quartet will perform all-dates with South African fifth man/keytar assassin Ben Rausch, and primary support for the tour are labelmates Radstewart. Full tour dates are posted right here; European dates are being finalized and please God Please GOD PLEASE let's have the band back to the U.S., yeah?