Review: Johnny Foreigner | You Thought You Saw A Shooting Star But Yr Eyes Were Blurred With Tears And That Lighthouse Can Be Pretty Deceiving... 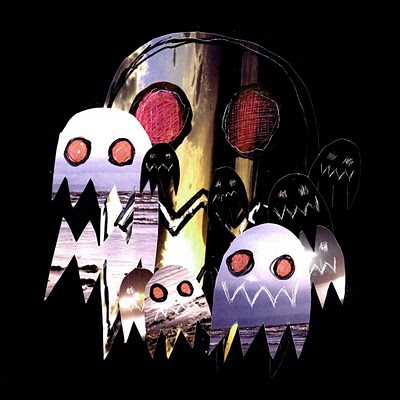 Johnny Foreigner's guitarist and primary songwriter Alexei Berrow in September summed up the Birmingham, England-based noise pop titans' forthcoming, six-track EP as containing the loudest and quietest songs it has ever recorded. This may be true, but Mr. Berrow's mild description minimizes the completely enveloping moods the music evokes, downplays the exciting developments in songwriting captured in the collection, and only hints at the aural and stylistic variety of You Thought You Saw A Shooting Star But Yr Eyes Were Blurred With Tears And That Lighthouse Can Be Pretty Deceiving With The Sky So Clear And Sea So Calm. The second half of "The Wind And The Weathervanes" is towering and anthemic and atmospheric, weaving together feedback, strings and crashing percussion. The aggressive "Who Needs Comment Boxes When You've Got Knives" points affirmatively in the direction of scene contemporaries Calories as well as hardcore legends Texas Is The Reason. The beautiful, droning closer "Yr Loved" flickers futilely, like a candle drowning in a pool of its own wax, and recalls earlier Smog. "Elegy For Post-Teenage Living (Parts 1 and 2)" is two different songs sewn together, opening as a familiar Johnny Foreigner guitar pop anthem but ending as a light, Dismemberment Plan-referencing dance pop nodder.

Despite Berrow's assertion here in September that the release lacks a theme, the lyrics persistently reflect narratives about letting go and trying to move on (or, pretending to let go and pretending to try to move on). While it perhaps incorrectly posits linearly chronological songwriting, the theme fits nicely, actually, at the end of the sequence comprised by Johnny Foreigner's two full-length recordings: Waited Up Til It Was Light was generally about Birmingham, and Grace And The Bigger Picture was generally about being away from Birmingham and the personal joys and fractures that result. You Thought You Saw... would seem to more closely examine the fractures and contextualize them in a world that has kept going in spite of it all.

It says something about the unchecked creativity and prolificness of Johnny Foreigner that the EP (which at one point carried the working title There When You Need It) doesn't contain what are arguably the best tracks it has released this year to date: the stunning demo version of "With Who, Who And What I've Got" has been freely available for download since May, and the bottomlessly poignant "199x" was given to only the couple dozen fans who ordered plush ghosts as part of the Exorcism Project. That the threesome didn't feel the need to include the two as-yet-unalbumed tracks on the EP underscores that Johnny Foreigner continues to somehow perfect more songs than it has the time and energy to market via what is the (largely dying) traditional music business model. And there is still more unalbumed songs waiting in the wings: fans who submit photos for use as part of the unique, crowdsourced sleeve art for the EP will receive a download code for the track "JFNV" (according to the band "it's pronounced nihonjin no tame no yakei"). Two more tracks grace a split single with labelmates Stagecoach; Alcopop is already taking orders for the single here, and it contains Johnny Foreigner's new "True Punx" and the band's cover of Stagecoach's "45."

Alcopop releases You Thought You Saw A Shooting Star But Yr Eyes Were Blurred With Tears And That Lighthouse Can Be Pretty Deceiving With The Sky So Clear And Sea So Calm as a 12" later this month, but the collection has been available for weeks via digital music storefronts serving North America in an effort to capitalize on Johnny Foreigner's just-ended tour here supporting incendiary Cardiff collective Los Campesinos!

[buy the EP from EMusic | ITunes]