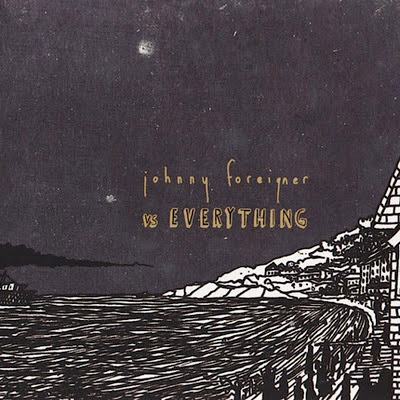 Spoiler Alert: The chorus of "You vs. Everything" comes back, and when it does it's the greatest moment of the greatest song of the greatest album of the year. In a just world, the song would roll under the credits of dozens of feature-length teen dramedies by the middle of the decade. Or soundtrack montages of the young and the jilted, ditching soul-killing jobs, driving too fast in cars, smashing mailboxes, dreaming big dreams and proceeding with the business of Getting Over It And Getting On With It. In fact, the entirety of Johnny Foreigner's captivating third LP rides a unifying cinematic arc -- it's even divided into three acts -- from the first syllables of the blitzkrieging opening anthem (with the characteristically clunky name) to the final song's final beats winding down like a stiffening tin man.

The collection's cohesiveness is the product of something so very simple, it is easy to overlook it, that thing that elevates Johnny Foreigner Vs. Everything above the Birmingham, England-based indie titans' prior full lengths, that thing that likely makes the wildly ambitious 17-song set the best record of 2011. At bottom what makes Johnny Foreigner's new long-player so special is that it was created completely on the trio's own terms. No deadlines. No budgets. No producers. No one saying "no." As a result of the time and mental headspace this approach afforded the band, Johnny Foreigner Vs. Everything is not only beautifully conceived, but is also a completely unvarnished collection, in the sense that there is nothing that gets between what the band hears in its heads, and what fans hear on the record. It reminds us (although it occurs to us this may not be a real memory, brain is getting weird) of the reason Pennsylvania-based garage-psych legend Brother JT would strip off his clothes on stage: he didn't want anything inhibiting the transmission of the rock from him to the people.

On Johnny Foreigner Vs. Everything the melodies are grander, the emotions more potent, the texture and subtleties more refined. Sure, the record has a concept, but it needn't be speculated on or sussed out: fronter Alexei Berrow came right out and told fans what it was in one of the first interviews of the album's promotional cycle. As Mr. Berrow told Stereoboard in September, Johnny Foreigner Vs. Everything is less autobiographical than the prior two, and concerns itself with "the alternate universe theory; for every decision you make, there exists a world where you made the opposite. There's also internal monologue in the merits of experiencing stuff versus capturing it for posterity. There's some meta-fiction. The overall story is the world's only happy shipwreck, where, instead of drowning, everyone gains the power of flight."

The beating heart of the record, an amalgamation of harrowingly poignant ballads ("Johnny Foreigner vs. You," "Alternate Timelines Piling Up") and the band's characteristic, spitfire guitar anthems ("If I'm The Most Famous Boy You've Fucked, Then Honey, Yr In Trouble," "What Drummers Get"), is of course the songs. The threesome has continued to refine its songcraft while nodding affirmatively to various influences, resulting in the majesty of the grand piano on the ballad "Johnny Foreigner vs. You;" the melodic, Lali Puna-esque blip-pop of "200X;" the soulful brass appointments on "Jess, You Got Your Song, So Leave;" and the subdued, Album Leaf-y tone-and-groove of "Supermorning."

In a very interesting way, Johnny Foreigner Vs. Everything serves as an effigy for bummers. Early in 2011, the band invited fans to submit spoken-word bits about cursed songs, and many if not all of these were woven into sections of the record, to be celebrated, and to be auto da fe'd. The cliche is time heals all, but perhaps Johnny Foreigner has created a faster route to making the stomach-churning irrelevant by voila!-ing them into art. At the same time the process of incorporating these bits captures them for all time, like an insect in amber. Maybe some shit you never get over, it just gets wall-papered over, and eventually the wallpaper is more useful, more interesting, certainly much nicer than the shit under it. Lex, Kel and Jun had their own use for the bad mojo, turning it into three interstitials -- "Concret1" and "Concret2," as well as "The Swell," which ushers in the thrilling final numbers "Like Neverwhere" and the stunningly beautiful "Alternate Timelines Piling Up" -- that portion the record into digestible chunks for the ADD-addled.

Johnny Foreigner Vs. Everything is released tomorrow in the UK by Alcopop! Records; the collection will be followed by the single for the song "Johnny Foreigner Vs. You" Nov. 14. This coming weekend the band launches the album with shows in London and Birmingham; London appears to be sold out, but remarkably there appear to be Brum tickets yet BUYBUYBUY. If you've not done so already, read our comprehensive interview with Berrow, Junior Elvis Washington Laidley and Kelly Southern right here.

(don't) show us your fangs by johnny foreigner

What Drummers Get by johnny foreigner

How savvy of you a year ago to compare the lack of inhibition of this record to Brother JT's stage presence, given the metaphorically brave way the band performs "Johnny Foreigner vs. You" to begin its show.

I am nothing if not savvy.