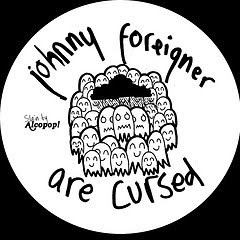 Birmingham, England-based noise pop demigods Johnny Foreigner make a triumphant return to releasing physical product with two face-melting rockers and two ballads, all corralled on a single compact disc affixed to a limited-edition branded frisbee. Yes, you read that right. The format, of course, is a gimmick, and the music is what matters. But, even so, it ignores the elephant in the room to leave aside the fact that the physical manifestation of Certain Songs Are Cursed comes on the underside of a fricking novelty flying disc. All 250 discs sold out in under 24 hours; Johnny Foreigner and co-conspiring label Alcopop! clearly know the band's audience. For the physical product-averse, MP3s of the collection are still being sold right here.

Incendiary lead track "What Drummers Get" crackles with the same energy as Johnny Foreigner's pace-setting 2008 A-side "Our Bipolar Friends." And while the title isn't posed as a question, the answer, apparently, is "Drummers! Get! Everything!" Which makes us wonder what exactly it is that JoFo drummer Junior Elvis Washington Laidley is getting... Elsewhere fronter Alexei Berrow's lyrics turn characteristically clever and self-deprecating: "I'm half the man you think I could have been" and "better kill you off than lead you on." The song "Twin Sisterzz" touts lacerating guitar in the verse and nice harmonies in the more muted chorus, before the track decomposes in a breakdown not unlike that of the blistering "Harriet, By Proxy" from the trio's startlingly good late 2010 EP You Thought You Saw a Shooting Star but Yr Eyes Were Blurred With Tears and That Lighthouse Can Be Pretty Deceiving With the Sky So Clear and Sea So Calm.

Certain Songs Are Cursed doesn't present an overarching theme, but the final song of the collection -- the acoustic ballad "Certain Songs" -- would seem to point to Johnny Foreigner's planned third long-player. Last month the threesome put out a call for audio samples of fans talking about songs that remind them of failed relationships. And if we understood the aforementioned blog post correctly -- and since we didn't hear a frothing mass of such samples on the EP -- we think the samples will be used on the new album. And "Certain Songs" features just such a sample, and is perhaps a clue to (or at least inspiration for) what lies ahead.

More importantly, the act of including actual fan contributions to a recording is perhaps the logical end of the band's persistent and, frankly, delightful efforts at bringing its fan base into the music. With its earliest releases Johnny Foreigner was interested in making collectors items. But with the release of the Every Cloakroom Ever EP [sold out], things got more inclusive. That EP had the name of everyone who pre-ordered th record on the sleeve art. Then with the aforementioned 2010 You Thought You Saw A Shooting Star... EP the handmade album sleeves incorporated photos submitted by fans. That album three may include actual audio from fans would seem to cap Johnny Foreigner's efforts at including fans, except that they are boundlessly clever and we expect they will come up with something even more awesome for successive releases.

Next week Johnny Foreigner launches a month-long tour of the UK and Europe to promote the EP and otherwise take their message to the masses. Tour-only shirt designs and a full itinerary? Sure, hit this link. We posted the two tracks from the EP below earlier this month, but in case you missed it, here's "What Drummers Get" and "Johnny Foreigner vs. You (Cursed Version)."

What Drummers Get by Johnny Foreigner