Review: The Feelies | Here Before 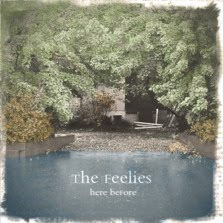 Stubborn and beautiful in their strummy, jittery, Greater NYC pop, The Feelies bless us today with Here Before (Bar/None), an album that stands up to just about any in their prior 30-year/4 album catalog. Which is good, since absolutely no one was waiting to hear how they incorporated dubstep, emo, shitgaze, or indie rock in general into their sound.

That's a comfort. Despite the trepidation of Here Before's (reviewer-bait) opening lines "is it too late/ to do it again/ or should we wait another ten? ...Well you never know/ how it's gonna go..." the band sounds as confident as ever behind Bill Million's strident stumming over Brenda Sauter's round, driving bass and Stanley Demeski's rock solid drums abetted by Dave Weckerman's percussion. Glenn Mercer glides over it all with easy, laid-back melodies and biting leads.

Though hailing from New Jersey, big city-stimulated jitters were the band's calling card. Early single "Fa Cé-La" was a tightly-wound energy shot for a band so closely compared to the Velvet Underground. Hmm... is it OK to compare a 30 year old band with a 40 year old one? They are a clear influence, but The Feelies are a much more fastidious band (score a point for Jersey over New York?). Similar attitude, sure, but less ponderous and more determined.

The intervening years may have calmed some of those jitters in favor of the jangle, and though that's not a bad thing at all, there's a lot of life here: "When You Know" is a reassuring driver, and "Time Is Right" resolves the questions posed in that aforementioned opening track with a simple riff resolving to a catchy, head-nodding cowbell in the chorus. "Time/Right/Now/Tonight" - yeah, it feels right to me too.

Elsewhere, "Change Your Mind" is a warm guitar embrace, "Bluer Skies" is an e-bow-laced optimistic act now plea (and I'm a sucker for a good "ba-ba-ba" song), and "On and On" seems to nod to The Good Earth's "Slipping Into Something's" slow-burn intro. It all sounds and feels so good. I can't wait to pick this up on vinyl.

Some, and occasionally all, of The Feelies have played together in one tantalizing form or another for the two decades following the release of their last album, 1991's Time For A Witness (A&M). In (relatively) recent history, that included a memorable show at Somerville's Johnny D's while Feelies guitarist Glenn Mercer was pitching his fine 2007 album, Wheels In Motion, where the band was awfully close to being The Actual Feelies, with early drummer Vinny DeNunzio and percussonist Dave Weckerman in the lineup, and bassist Brenda Sauter (who's own great band, Wild Carnation, opened) joining in on the encores. Throughout all of these, and other spinoffs like Mercer and Weckerman's Wake Ooloo, they were missing an important ingredient: guitarist/songwriter Bill Million. Million, who up and moved from New Jersey to Florida when the Feelies called it quits in 1992, provides a key element of the band's sound: a strummy base on which balances Mercer's sharper lines.

Feels so good to be writing that in the present tense.

The band is scheduled for the Middle East on May 14th (tickets). There are no openers listed at the moment, so if we're lucky it'll be another "evening with..." show like their last visit there. Two stretched-out sets are hard to argue with.

Email ThisBlogThis!Share to TwitterShare to FacebookShare to Pinterest
Labels: The Feelies, velvet underground