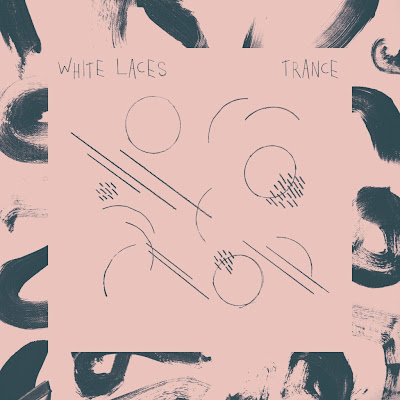 Where do you go? When you've pursued for years a minimalist agenda within the fairly limited framework of a guitar band, when you've refined your sound down to a tight aesthetic kernel that still manages to sound sleek, full and fluid -- where do you go? Well, apparently you go to Philadelphia, which is where thoughtful Richmond space-pop quartet White Laces found itself last winter, recording its sophomore set Trance with studio savant Jeff Zeigler. The resulting record is ambitious and remarkably elegant, filled with shimmer and vim, softly encased in precise delays and reverbs that conjure a steadily breathing aura around White Laces' economical compositions. The music has taken White Laces out of Richmond and Philly and across the U.S. (supporting a peaking The War On Drugs), and where it takes the band next increasingly appears to be within White Laces' own control.

Fans of the band who haven't checked in since its relatively noisy and somewhat less agile self-titled 2010 EP, which was led by the reeling highlight "Motorik Twilight," might not even recognize White Laces' music, so far has it progressed. Those who are just turning on to the act, to whom White Laces is a new, up-and-coming band, are encountering it at perhaps the most opportune time: Trance evidences a foursome cresting, its songwriting inspired, its performances hot, its sounds printed to tape by one of the most creative guys working right now. And while the aforementioned Mr. Zeigler is one of the best getter-of-sounds in the game right now -- from the psychedelic soup of ambient tracks hiding in plain sight on The War On Drugs' 2011 set Slave Ambient to the bright and crisp guitars that led upstart indie-punk trio Break It Up's brilliant "New Penzance" -- the simultaneously more focused and expansive sound he elicited from the White Laces in the studio isn't the only story here on Trance. The fact is that Trance, while a game-changer, does not wholly reinvent the wheel for the band, which established a fertile if spare creative framework with its 2012 debut LP Moves. It's just that Trance consistently -- thrillingly -- presents White Laces' smartest, best musical face.

Lead preview track "Skate Or Die" shudders with passion, from the chiming guitars to fronter and guitarist Landis Wine's unusually rugged and immediate vocal. From incantatory opener "Teenage Brain" -- a sort-of tribal "Everybody Wants To Rule The World" for the disaffected -- through the sedate, thrumming final tune "Strangulation Blues," every measure of the album is more inherently tuneful. With each release White Laces has gone further to divorce itself from genre, but Trance's bracing economy, bright melodicism and the rhythm section's firmly applied timekeeping perhaps counter-intuitively reveals within the band's measured post-punk cool DNA strands twirling back to notable touchstones such as The House Of Love's "Shine On" or even A Flock Of Seagulls' "Space Age Love Song." These referents don't suggest White Laces' sound is dated, but rather that its musical appeal is crossing over from something niche and approaching something out of time, even classic.

Trance is being released by Happenin Records, EggHunt Records and Arrowhawk Records, with each label handling different formats. Alabama-based Happenin releases Trance on CD Tuesday, and is co-releasing the set on vinyl 12" with EggHunt. Richmond-based EggHunt, which just launched this past April, is already offering through its web site 180-gram vinyl pressed to either pink or blue right here. The vinyl edition is limited to 1,000 pieces, with the colors limited to 100 units a piece, topped off by 800 foot-wides pressed to the traditional black media. EggHunt's web site lists the vinyl release date as Oct. 24. Athens, Georgia-based Arrowhawk will release Trance on cassette tapes, but there is as yet no information about when that might be available. For those who missed White Laces' Moves, which we reviewed here in XXX, there is some good news. EggHunt has licensed the collection for a expanded CD release that will be available imminently and is limited to 250 units. The EggHunt CD version of Moves will include two tunes previously available as a cassingle from Treetop Sorbet, "Ascend" b/w "Deep Moves." A third bonus track is included as a hidden track, and to preserve the surprise we won't tell you anything more about that except that a certain very handsome blogger strongly lobbied for its inclusion. Three preview tunes from Trance, "Cruisin'," "Skate Or Die" and "Nothing Clicks," are available to stream via the Soundcloud embeds below. White Laces are expected to announced additional live dates soon, but it will still be pretty busy this month with handful of dates around its home Commonwealth, which are listed below.

Email ThisBlogThis!Share to TwitterShare to FacebookShare to Pinterest
Labels: A Flock Of Seagulls, Arc In Round, Break It Up, Jeff Zeigler, The House Of Love, The War On Drugs, White Laces