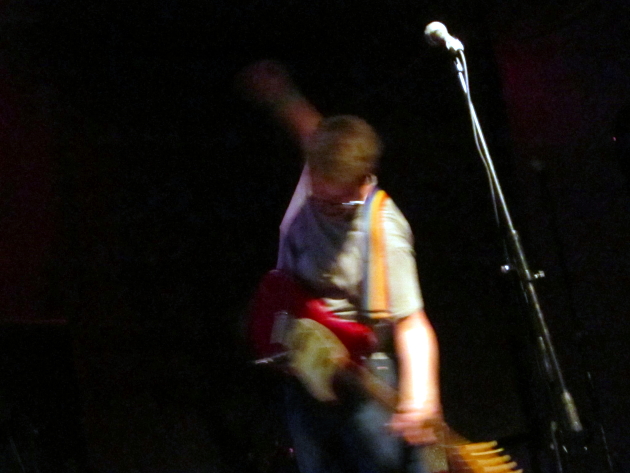 >> For quite a few years we sided with Tom Petty, believing that the waiting was the hardest part. What we learned in the interim is that that feeling sort of subsides once you're an adult and a lot of life's waiting is behind you. Now we feel firmly ensconced in the Johnny Foreigner school of thought, which believes the hardest part is letting go. We were met yesterday with an opportunity to remember that, as news made its way to us that beloved Boston noise-pop goliath Soccer Mom was pulling the plug on its operation after just a couple more live shows. The context here is that The Mom will play as part of the bill for static-blasting scenemates Young Adults' final show Oct. 12. News of Young Adults' dissolution surfaced this spring, and we have steeled ourselves to the idea of living in a post-YA world, so the sting of the noisy power trio's demise has long since ebbed. But Soccer Mom's formal announcement today was certainly a surprise to many. The foursome -- founded by guitarist and singer Dan Parlin about five years ago -- rose slowly and steadily up from the Boston underground on the back of a couple singles and an EP, all of which we wrote about in these electronic pages, and with the release of its fiery self-titled full-length this past spring [review here, stream it via the embed below], it was as if the band had finally, finally arrived. Now after its show Oct. 12 and an as-yet-unannounced final show, The Mom is gone. If there is some consolation, it is that we're already hearing rumblings about new music projects coming from certain of the members of Soccer Mom, and there is similar news about new music coming from Young Adults fronter Chris Villon, and we look forward to bringing you more information about those things at the appropriate time. In the meantime, Young Adults intends to issue to the wilds of the Internets tomorrow two previously unreleased tunes "Old Kids" and "Void," and we can tell you that both of them rage against the dying of the light and are sure to inspire fist-banging mania among the band's adherents. Chances are if you keep an eye on the Young Adults Facebook page tomorrow you'll see the announcement, but you may also want to open a browser tab for this link and this link, too, just to make sure you've got an eye on things. Young Adults' final salvo into the proverbial breech will occur, as mentioned supra, Oct. 12 at Great Scott in Boston; in addition to Soccer Mom, California X and Earthquake Party! will also perform, making the show a wall-to-wall slayfest. All the details are at this Facebook event page. Now get some rest, you.

>> As the autumn leaves begin to turn and ultimately fall to the streets below, the bare trees will in turn make way for winter's eerie, late-night silences that seem to exist simply for fragile, emotional drone music. Overly sentimental, perhaps, but this reviewer will certainly be adding all 34 minutes of "The Disciplined Body" by Gabriel Saloman to his queue of introspective, ambient jams. Mr. Saloman, who operates out of Vancouver and may or may not be better know for his work with noise-duo Yellow Swans, has turned his attention of late to pleasing piano drones and swooping electronic zones for his latest, two-track release Movement Building Vol.1. The set that apparently collects recent work composed by Saloman to accompany a dance performance by fellow Vancouver-ite Daisy Karen Thompson called "Re-Marks on Source Material." Movement Building Vol.1 will be released by Shelter Press Oct. 18. An preview excerpt titled, for some reason, after the record and not the song, offers up a glimpse into Salomon's sonic world. The composition commences with glowing, quavering bass pulses, then slowly unravels. The front end of the excerpt at first sounds synthetic and vaguely electronic, but gradually gives way to a spacious instrumental section that captures the introspective, clenched emotions of the most chilly, starry evening. After two minutes, the overbearing bass steps aside and an impossibly reverberated guitar drapes a wandering, bottom-string motif over a kick drum that mimics a heartbeat -- an arresting move that gives the glacial track a queerly vital immediacy. And that's just a single excerpt! Stream "Movement Building Vol.1 (Excerpt)" as well as a second excerpt via the Soundcloud embeds below. These relatively quick flashes of the larger whole of "The Disciplined Body" makes purchasing the stark, 500-edition vinyl that much more tempting. Buy it from Shelter Press right here. -- Edward Charlton

>> Remember Bozmo? We covered the Berkeley, Calif.-based outfit now and then, noting its awesome, wide-eyed '60s-inspired psychedelia. The act's sound is never too derivative, coming across more as homage than rote reproduction. More recently we turned on to the apparently affiliated California act Los Roys, whose latest self-released digital EP Hag Season seems to be further evidence that there must be something -- something murky and mod-garage -- in the obviously-only-proverbial Northern California water nowadays. Over the course of six tracks, Hag Season grounds itself in bright acoustic strumming while layered harmonies, snappy snare work and clean lead guitar flesh things out. The overall effect is not too far from some of the fractured pieces by White Fence, whose latest single on Famous Class comes highly recommended. Outside of the eponymous opening instrumental and similar closing track, Los Roys' EP offers up four perfectly realized pop songs that showcase humorous crooning and carefree lyrics in equal measure. "One Thing At A Time" strikes this listener as a sarcastic ode to dealing with life's many problems. "Honey Bear" not only revisits the very Lewis Carroll-esque whimsy that dominated much of the British freakbeat and psychedelic scenes from 1966-1968, but further adds to the tongue-in-cheek fun that Los Roys capture so well (Case in point: The dejected "fuck" that begins "Twisted"). Speaking of "Twisted," it's the best song of the bunch -- all fuzzy vocals and funny warbling and cackling that leads right into an odd, lounge-y electric guitar riff. For those who regard the slack, cut-up posturing and atonalism of the Pebbles, Vol.3: The Acid Gallery compilation as the pinnacle of boomer-generation creativity, Los Roys could not be any more appealing. They speak the truth, man! Stream Hag Season via the Bandcamp embed below, and click through to download it for any price. -- Edward Charlton