That Was The Show That Was: Cymbals Eat Guitars with Bob Mould | Paradise Rock Club | 12 Sept. 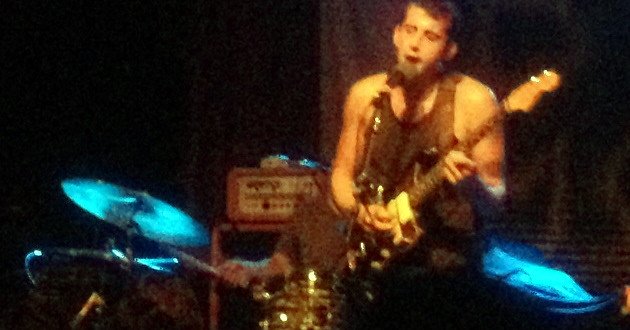 We recognize the ridiculousness inherent in reviewing a show where Hüsker Dü-er and Sugar daddy Bob Mould performed, but in which he is not the star of said review, but bear with us. NYC indie rock troupe Cymbals Eat Guitars, who opened for the aforementioned Mr. Mould Friday night at Boston's legendary Paradise Rock Club, are out touring what may very well be their masterpiece, and stood to gain more than the legendary headliner if things went well. Cymbals Eat Guitars' recent third LP is simply titled Lose, and it is a dense, emotional and raw collection. That they're able to promote said record playing shows with a punk icon whose music pretty much set the curve for dense, emotional and raw music is a nifty bit of serendipity. And we're glad to report that Cymbals Eat Guitars were well-received by a crowd that included a substantial contingent of older folks more than likely inclined to consider the night's opener an afterthought, if they considered the opener at all. Happily, we counted plenty of older dudes visibly connecting with and even head-banging excitedly for the younger act.

Cymbals Eat Guitars' set unsurprisingly drew heavily from Lose, with a vital, anthemic reading of early single "Warning" setting the tone for the rest of the foursome's stage time. As noted in the press surrounding the new record, Lose represents no small mount of catharsis for fronter Joseph D'Agostino, a songwriter who played things closer to the vest on the band's earlier records. Despite the shorter time slot, D'Agostino managed to wade pretty deep into the album's emotional whorl, with album highlights "Jackson" and "XR" memorializing in part the sudden loss of a dear friend and former collaborator earlier this century. Cymbals Eat Guitars wisely ended with the record's centerpiece, the eight-minute tour de force "Laramie." The tune touts a slow build-up and concludes with a excoriating noise section during which D'Agostino wrung out notes up the fretboard from behind his head. The old punx liked that a lot. Lose was issued Aug. 26 by Barsuk Records and is available for purchase right here.

"Bob Mould still has it," I texted to a friend as I walked out of the Paradise late Friday night -- and why shouldn't he? With the exception of when he took some time away for important things like pro wrestling and dance music, the man has routinely released impressive rock 'n' roll record after impressive rock 'n' roll record, including his most recent set Beauty & Ruin. And all of that since the dissolution of his second genre-defining group, the aforementioned Sugar. Mould's set Friday was book-ended by two undisputed Hüsker Dü classics in "Flip Your Wig" and "Chartered Trips," respectively, and the meat in the middle served as a mini-"Our Band Could Be Your Life," dipping into the Hüsker and Sugar songbooks heavily, as well as Mould's impressive (and steadily growing) solo repertoire. Mould is backed by one of the best rhythm sections in punk rock, with Superchunk/Mountain Goats' John Wurster on drums and Split Single-guy Jason Narducy on bass, and together the trio impressively recreated the classic SST squall of sound that Mould helped define three decades ago with utterly classic records such as Zen Arcade and the more refined New Day Rising. The obligatory mosh pit materialized in the crowd early on, and it seems safe to assume the multi-generational melee included more than a few who had been there to thrash the first time around. Beauty & Ruin was released by Merge Records June 3 and is available for purchase right here. -- Dillon Riley