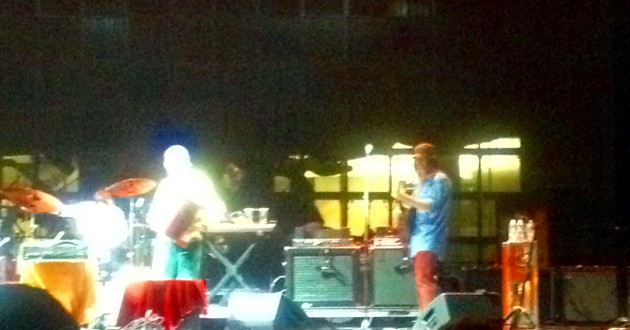 [PHOTO: Dillon Riley] Being huge fans of the Elephant 6 collective mainstay's brief (but life-affirming) oeuvre, we were understandably psyched to catch Neutral Milk Hotel assume the Boston Calling stage Friday night prior to The National's headlining set for the first night of this fall's iteration of the Boston Calling festival. Lo and behold, the act did not disappoint. Fronter/cult figure Jeff Mangum appeared on stage first, an electrified acoustic guitar in hand, sparking uproarious applause. He then dipped into a solemn strum. As his piece gained footing and favor, the fellow members of the classic Neutral Milk Hotel lineup bounded on stage behind him. Then, with the five supporting characters behind Mr. Mangum, the unit broke into a glorious rendition of CC eternal fave "Holland, 1945."

From there, the hits did not let up, with the band gracing the crowd with nearly all of the In The Aeroplane Over The Sea, as well as a number of additional choice cuts from their debut LP On Avery Island. A particularly vibrant take on the On Avery Island standout (and supposedly Galaxie 500-baiting) "Naomi" proved to be one of our favorite parts of a moving and extremely fulfilling set. The self-titled song suites from the aforementioned Aeroplane drew some of the biggest cheers and sing-alongs from the crowd, but on the whole the massive swell of energy among the assembled masses incited by Mangum's mere presence onstage rarely abated, if at all, throughout Neutral Milk Hotel's electrifying performance. In a brilliant piece of showmanship, NMH's set ended just as it had begun, with Mangum standing alone, bellowing his heart out with distorted guitar strums clipping just like the records. "Two-Headed Boy Pt. 2", the final tune he played, was a fitting end to the story arc of Aeroplane as well as to the band's set this night. We're not sure where Mangum intends to take the band from here, but we certainly like the Boston Calling stage provided him with some decent closure, should that be what he's looking for. -- Dillon Riley