Boston Calling This Weekend: The Replacements Return To Boston For First Show In 23 Years 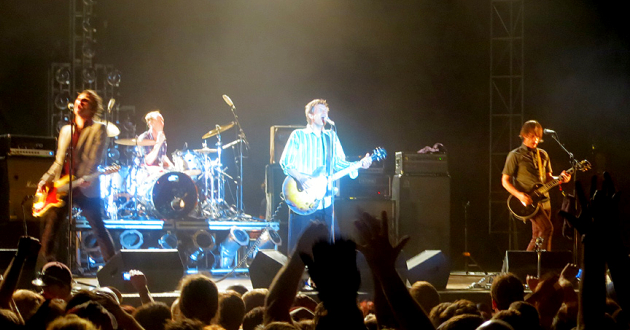 [PHOTO: The Replacements in Toronto in Aug. 2013 by Brad Searles, used with permission]

We don't often write about The Replacements here for the same reason people most people don't often write about gravity. The Minneapolis-spawned act is hugely important, but at this point it is largely taken for granted that the quartet's music and attitude underpin just about every square inch of indie rock. Mainstream music fans can certainly be excused for regarding the quartet as a footnote: The 'Mats rated zero gold records; zero platinum records; zero top 20 hits. They were never asked to appear on "The Muppet Show," they were banned from "Saturday Night Live" (think REALLY HARD about that). The band's original lead guitarist is dead, the original drummer would rather be a painter, and the frontman for years said he would rather stay home.

But the legend of the band has grown with each passing year since its roadies bashed out their last notes -- the de rigueur ending of many a Replacements show during the act's original run -- in Chicago on July 4, 1991. And so a funny thing happened on the way to oblivion: it basically became stupid for fronter Paul Westerberg NOT to join up with bassist Tommy Stinson again, along with some trusty old friends, and just take the money (rumored to be in the ballpark of $250,000 per show). And, thank the higher power of your choosing, some of that filthy lucre is bringing the legendary, Our Band Could Be Your Life'd rock act to town for the latest iteration of the Boston Calling music festival this coming weekend.

You've heard the legends, right? The drunken antics, the feces in the elevator, the seemingly intentional torpedoing of big gigs during the band's wild '80s. Indeed, its instincts regularly tilted toward pissing upon the polished loafers of opportunity. And so the seeds of the current reunion weren't sown by promises of the big payoff, or at least not solely so. First Mssrs. Westerberg and Stinson along with founding drummer Chris Mars got together to record two tunes including "Message To The Boys" to entice fans to buy the fairly superfluous 2006 compilation Don't You Know Who I Think I Was? Mr. Mars didn't actually drum on the 2006 recordings -- drumming duties fell to current 'Mats drummer/musical journeyman Josh Freese -- but he did contribute backing vocals. But everything seemed to go well, and well enough that the band set to recording again last year.

It is the recording sessions for the 2013 EP Songs For Slim -- which aimed to raise money to help late-period 'Mats guitarist Slim Dunlap recover from a stroke (founding guitarist Bob Stinson's body succumbed to years of alcohol and drug abuse in 1995) -- that ultimately spurred the band into its present state of sorta-being. Indeed, press for the release of Songs For Slim was almost completely overshadowed by pronouncements from Paul and Tommy indicating that playing shows under the Replacements moniker was no longer out of question. And then the 'Mats tumbled into an improbable new existence, top-lining festivals over the last 12 months, and now -- finally, Finally, FINALLY -- bringing the show to Boston once again.

Looking at this set list of The Replacements' heretofore final Boston show, which occurred all the way back in February '91, one sees the band didn't dip any further back into its catalog than "Within Your Reach," its debut LP and Stink EP ignored at least for the night (Westerberg, we should note for those that don't know, enjoyed a pretty hopping solo career after the dissolution of The Replacements, but he has not played Boston since 2006). Which is something that, unsurprisingly, distinguishes The Replacements of 1991 from the (sorta) Replacements of 2014. While giving the people what they want these days has sometimes required Westerberg to lay on a couch on stage, set lists for all the reunion gigs have included tunes from as far back as the band's first LP, which has thrilled the hardcore fans who have the pocket change to purchase the pricey festival tickets one needs in order to gain an audience with The Replacements these days. Boston fans attending this weekend's Boston Calling festival were asked to part with at least $75 for the opportunity to see The 'Mats Sunday night slotted in between Spoon and The Roots with Nas. Even so, we imagine nary a one will be complaining about the ducats when the band hits the stage.

Old-time Boston rock fans will see a familiar face on stage, of course, assuming Dave Minehan is handling guitar duties for the show. Mr. Minehan made his name in the Boston act The Neighborhoods in the early '80s and later as a noted recording engineer around town. And if Minehan's face doesn't ring a bell for the kids in the audience, it's possible that The Replacements will bring along Green Day's Billie Joe Armstrong to help out on vocals and guitar; Mr. Armstrong, as obliquely alluded to supra, has been playing with the group a fair amount this festival season, and his schedule looks clear for a while. If that's a thing you would hope for, then go ahead and hope -- anything to make this week go by faster, yeah? For what it is worth, here is a Clicky Clicky's Choice of 21 favorite 'Mats tunes. Get down front Sunday night to hear some of 'em.