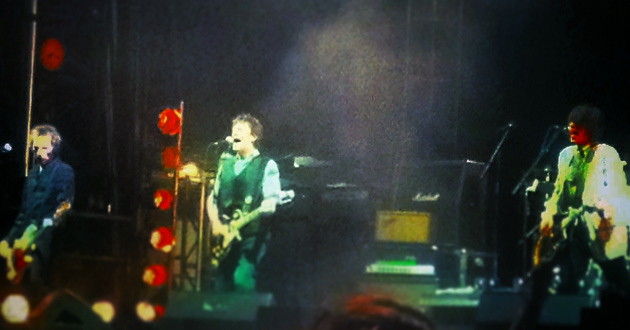 [PHOTO: Dillon Riley] Here it was, Sunday, the day we waited for with bated breath, the final day of this fall's Boston Calling music festival. The day we saw one of the greatest rock acts ever, The Replacements, return to our fair city for its first area show in more than two decades, along with noteworthy bands who channel in one form or another the legendary act's influences. A friend we encountered Sunday on Boston's City Hall Plaza noted the presence of a much older crowd than previous days, and we laughed nervously in agreement, wondering what that said about us, our mindset, and our own inherent age/mortality. Such concerns were assuaged -- at least temporarily -- by the incredibly vital sets of rock 'n' roll we saw; here are the highlights. -- Dillon Riley

We noted in our preview last week The War On Drugs' recent breakthrough with the release of its latest record Lost In The Dream. So it's somewhat sad to report that the general excitement surrounding the band out among the broader indiedom wasn't reflected in the Boston crowd's reaction to the Philadelphia act's midday set. Indeed, festival-goers seemed a little less than enthused, which is a shame, because Adam Granduciel and his cohort laid on the grooves nice and thick. There was a propulsive chug to some of the new record's sleepier numbers, including the title track. For his part, Mr. Granduciel employed some nimble fretwork on punchier tunes such as the album's early single "Red Eyes." A reference to the dearly departed rock radio broadcaster 104.1 WBCN fell on deaf ears to boot, prompting Granduciel to deadpan something to the effect of "Y'all should get out more." We wholeheartedly concur.

In case you need reminding, Spoon has a lot of good songs. A lot of them. And they played quite a few of them in a challenging time slot early Sunday evening (when many minds were likely drifting ahead to the next hour's highly touted Replacements appearance). But Austin's favorite sons acquitted themselves with aplomb, however, and it was nice to see the act retains a youthful energy whilst still being able to showcase the major progression it has undertaken over the last two decades. The band's bold opening salvo was a nervy take on "Small Stakes" off 2002's critically adored Kill The Moonlight before slipping into a few hot tracks back-to-back off their latest offering They Want My Soul. No complaints here, as the new record bursts with massive hooky rock-and-roll without abandoning the experimental nature of certain of Spoon's work. A heartfelt mid-set shout-out to the beloved 'Mats, who were figuratively on deck, was well-received, too, and provided a candid and true moment of real meets real.

"Yes, we are this close for the goddamn Replacements," is what we kept saying to ourselves as we hung over the barrier by the right side of the stage Sunday night. And the Minneapolis-spawned act's fiery set was everything we thought it would be, and possibly more. No, Billie Joe didn't show, and couches be damned, the recently hobbled fronter Paul Westerberg made it through the whole hit-spangled, 20ish-song set without any back issues... though he did pour salt and pepper on his guitar. The set came off like all those legendary 'Mats sets we've only read about in Our Band Could Be Your Life, all manic energy and hilariously flubbed choruses. Sure, Westerberg forgot an entire verse of "Androgynous," big deal -- the crowd knew all the words and was happy to fill in the blanks. The band snuck offstage for all of about 30 seconds before returning to run through a brilliant take on Pleased To Meet Me's "Alex Chilton," a towering love letter to the legendary and iconoclastic former Big Star co-fronter (the song was explosively delivered again Tuesday night on late night television). Turns out Nas and The Roots had sent Paul, Tommy, Dave and Josh back out for the quick encore (likely sacrificing some of their own stage time in doing so, it should be pointed out). So thanks to the festival closers for letting the boys play, and thank you boys for taking the piss out of the final chorus on "I Will Dare." The laughs helped chase away the tears of joy.

And that about wraps it up for Boston Calling 2014. On a personal note: what an amazing, scary, tiring and emotionally trying weekend. We believe Saturday's final run of Spoon into The Replacements into Nas + The Roots' headlining set may have been the best show-going experience of our year thus far, and you better believe we've seen some shit. Until next time...

Email ThisBlogThis!Share to TwitterShare to FacebookShare to Pinterest
Labels: Paul Westerberg, Spoon, The Replacements, The War On Drugs