That Was The Show That Was: Joyce Manor with The Weaks,The Exquisites | The Sinclair | 14 Sept. 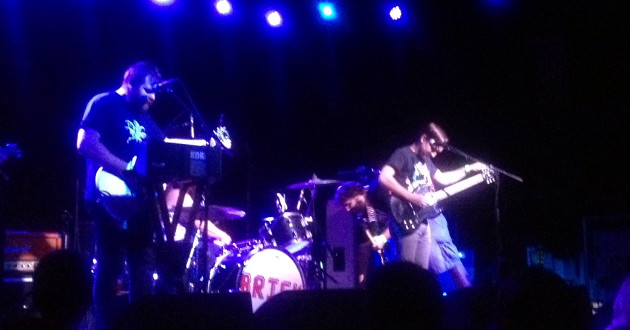 [PHOTO: Dillon Riley] If, like us, you prefer your pop-punk heavy on both the former and the latter, last Sunday's show at The Sinclair was not to be missed [unless you are slacker, in which case you did miss it, as tickets sold out 10 days prior. -- Ed.]. While it's inaccurate to state that hotly tipped topliners Joyce Manor and Clicky Clicky faves The Weaks sound alike, it's undeniable that the acts draw from a similar thematic well. The Weaks approach pop-punk with a pronounced little-c classic big-R Rock aesthetic, incorporating plenty of flashy guitar leads, while Joyce Manor's judiciously edited punk channels elements of vintage hardcore and never lets a song drift past 150 seconds. In common is an almost overwhelming tunefulness and refreshing earnestness that marks the best of the millennial generations' guitar bands.

The Weaks commenced the evening's program of music with hook-laden tunes from their cheekily titled debut EP The World Is A Terrible Place & I Hate Myself And Want To Die, as well as what sounded like some yet newer jams. In the flesh, the Philadelphia-based heroes manifest as a quintet, with a three-guitar attack that ably recreates the thick guitar sound that populates their recordings. Dual fronters Evan Bernard and Chris Baglivo handle most of the vocal and musical heavy lifting, and Mr. Bernard is an especially engaging presence on stage, with a full, booming voice and impressive array of facial hair. "Nietzsche's Harvest Song" connected with the early-arrivers and a particularly lethal take on the EP-highlighting "How To Put An Audience To Sleep In Under Two Minutes" served as a nice entree to the headliner's abbreviated brand of punk rock.

California-foursome Joyce Manor's recently issued LP Never Hungover Again, its fourth, may be the band's finest to date. Not one of the set's 19 minutes feel wasted, and every musical element supports the massive hooks girding each song. Joyce Manor's stage sound and persona challenges the pop-punk tag regularly applied to it, and its notably rowdy shows evidence the fact the act is a breed apart from their relatively staid brethren. It would be an understatement to call what we participated in throughout the show Sunday a "mosh pit," as the assembled mass really had no choice in the matter: literally everyone on the floor was complicit (or at least made complicit) in the chaos. Don't get us wrong, it was a blast, and as much fun as we've had on a Sunday night in quite a while, but the melee almost inhibits the band. Almost. In spite of the swirling tornado of bodies before them, Joyce Manor pulled off its tricky vocal harmonies and quick-change dynamics quite impressively. Everyone in the crowd seemed to know every word and rhythm change in the songs from the new, Epitaph-released record by heart. Seattle's The Exquisites held down the middle slot of the evening, performing songs from its clever 2013 debut Self Titled.

Joyce Manor's tour continues anon with The Exquisites supporting, and is presently in the American south and heading back to the left coast; remaining U.S. dates are posted below. In early November Joyce Manor heads to Europe and the UK for 15 dates there. The Weaks appear to be off the road for now but have dates booked in Charlotte and Atlanta at the end of October. -- Dillon Riley

Email ThisBlogThis!Share to TwitterShare to FacebookShare to Pinterest
Labels: Joyce Manor, Mike Bell And The Movies, The Weaks