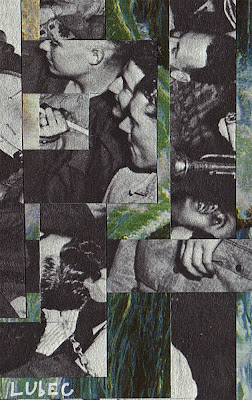 It often seems that dream-pop is more about the atmosphere and less about the dream itself, about checking the right boxes, dialing the right reverbs, fetishizing the right gear. Which is not to say that production concerns are not something that Portland, Ore.-based guitar-pop quartet Lubec contemplates. But the rising band is about so much more, and with its new full-length The Thrall it has so decisively delivered on its vision for a sonically sculpted, gloriously melodic and viscerally present sound that it is stunning. The set is not the quartet's first long-player -- 2012's Wilderness Days, collects an EP and other early recordings -- and we've been covering the act since its earliest days in 2009. So there is a substantial body of work, of research and development, that has brought Lubec to where it is today.

And all of that toil has paid off: The Thrall is, simply put, a revelation, a fully realized and kaleidoscopic guitar-pop masterpiece that presents the band's striking songcraft and bright optimism within a shifting aural landscape that brilliantly balances clean, jagged leads, crystalline reverbs and thunderous percussion and fuzz. The band refers to its sound as "basement philharmonix," and in years past as "sculpt-rock," but we'd suggest "elegant cacaphony" as an equally suitable alternate. Whatever you want to call it, and although its core members migrated to the west coast years ago, it is undeniable that Lubec has finally arrived, and they've brought with them one of the best records of 2014.

The Thrall is like the beautiful girl in the room whose feet don't seem to touch the ground. It's a diary that captures fleeting moments, and the inherently tragic beauty of impermanence. The narratives therein confront coming of age, aspiration, nostalgia and even disappointment, and are constructed from remarkably literate and thoughtful prose that is as nimble referencing classical mythology ("Sunburn!") as it is describing the incalculable hugeness of life and its possibilities ("The Thrall"). Fronter Eddie Charlton sings with devastating poignance in the climax to the stunning late album track "Another Ghost Song:" "how long has it been? since you lived on a whim?" Indeed, the album's emotional payload is largely driven by the pairing of Mr. Charlton's airy tenor with pianist Caroline Jackson's ethereal backing vocals (Ms. Jackson's piano, interestingly, anchors the band's low end, but makes tasteful forays into its upper register to splash more color across the band's already colorful sonic palette). The pairing of the voices follows a formula that worked for Clicky Clicky fave indie legends Lilys on its early singles and first LP two decades ago, and it works immaculately here within Lubec's smart and dynamic compositions, especially the driving album highlight "Gold Protege."

But The Thrall is so much more than affecting vocals, too. The set thrills by pushing a relatively conventional four-piece band to overachieve. Where indie titans Spoon dazzle by imposing a certain stripe of minimalism onto amazing songs, Lubec's aim is decidedly maximalist, instrumentally, although never redundant. All of Lubec's moving parts really move, and move with purpose in complementary cycles that all support central melodic and rhythmic ideas. And all of it supports the record's wide-eyed, full-hearted and still partly innocent appraisal of the bigness and odd magic of life. The Thrall marvels, and it is marvelous.

Indiana-based Like Young Records is releasing The Thrall in a limited edition of 50 red cassettes on Sept. 21. The first pressing of the cassettes sold out on pre-orders, which should give you some indication of the power of The Thrall; a second pressing is already planned. The band does have a limited amount of product on its collective person, so if you are lucky enough to live in Portland, you may still be able to get your hands on the tape. Lubec fetes the release of The Thrall with a hotly anticipated hometown performance at Mississippi Studios Sept. 21, an evening which also features music from Night Mechanic and Old Wave. Lubec has another in-town performance at The Firkin a couple weeks thereafter, and is planning a strand of house shows across the Pacific Northwest for later in the fall. Stream The Thrall via the Bandcamp embed below.