That Was The Show That Was: Beverly with The Drums | Brighton Music Hall | 22 Sept. 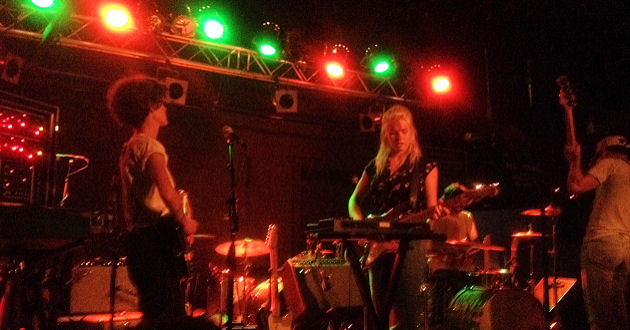 [PHOTO: Beverly by Dillon Riley] As is our wont, we descended last week upon one of Boston's finer rock clubs to revel in the now sounds in indie pop, which more often than not these days means getting to the club early to get a long listen to the undercard. After all, and as previously discussed, sometimes the most exciting time to find such commodities is early. And so it was that at Brighton Music Hall last Monday we put name and face to one of the lovelier dream-pop records of the year, Beverly's full-length debut Careers.

Beverly hails from Brooklyn, despite the fact that its sun-splashed sound evokes the mellower vibes more typically associated with the opposite coast of the U.S. Led by fronter Drew Citron, the band's hazy guitar attack largely echoes certain of the familiar tenets of the dream-pop playbook. What sets the act apart from contemporaries that prefer their noise sweetened, not stirred, is the ready tunefulness of Beverly's work: underneath the de rigueur noise are dynamic, well-realized compositions. The four-piece opened its set with a heavy sheet of tremoloed distortion that gracefully segued into Careers' opening track, "Madora." Thrilling highlights from the set included the preview track "Honey Do," which showcased the ascending vocal harmonies that feature prominently on the record. Beverly performance evidenced further that Ms. Citron and company have a singular approach to a genre that -- unfortunately, and if we are going to be real here -- too-rarely cultivates individuality. Careers was issued by Kanine Records July 1; buy it on LP, CD or download right here.

The newly truncated The Drums recently released a new record of its own entitled Encyclopedia, and its headlining set -- which took place just hours before the record's release -- offered plenty of new music. Pre-released tunes like the stuttering and tense "Magic Mountain" and the nu-Romantic confection "I Can’t Pretend," in particular, blended well with tunes from the act's previous two releases, pairing The Drums' characteristically minimalist, mechanistic groove with the experimental bent of the new record. Alongside the new material, the band delivered should-be hit after should-be hit from its self-titled debut and Portamento, and each selection elicited uproarious applause and word-for-word callbacks from an eager, engaged crowd -- a fairly rare feat for an early Monday night set. A three-song encore comprised of some of The Drums' earliest cuts certainly reminded fans of the reason for the early buzz surrounding the group, and included a white-knuckled iteration of "Let's Go Surfing." As the band finished up, we were left with the satisfied feeling of knowing that the indie pop world is most definitely a better place with The Drums in it. Encyclopedia is its third LP, and the platter was released by Minor Records Sept. 23. Buy it from the band here, and stream cuts from both bands via the embeds below. -- Dillon Riley

Email ThisBlogThis!Share to TwitterShare to FacebookShare to Pinterest
Labels: Beverly, The Drums