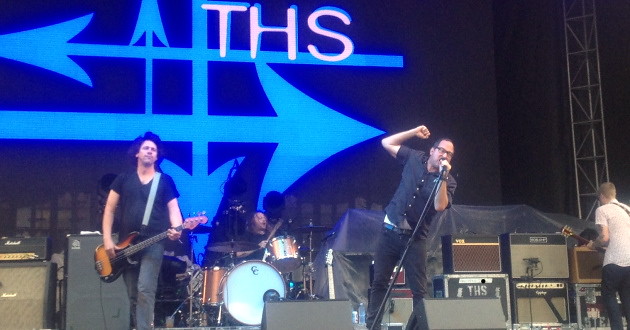 [PHOTO: Dillon Riley] As some of our more observant readers know, we had the good fortunate to wait out most yesterday's three-hour rain delay of Day Two of the Boston Calling festival from the relative safety of the VIP section of City Hall Plaza. Between some intense bouts of beach ball keep-up and sorta-frightening lighting strikes, we made some new friends and chatted about The Hold Steady, among other things. We were among the first hundreds back inside around 9PM post-delay, which afforded us the opportunity to be thoroughly impressed with New Zealand pop wunderkind Lorde's performance. It goes without saying that we're grateful to the Boston Calling staff for being accommodating and making sure we didn't get turned into Sizzlean via lightning blast last evening. Here's the best of what we heard and saw Saturday. -- Dillon Riley

Hype and tempest/teapot-scaled controversies aside, one thing was made clear during Sky Ferreira's mid-afternoon set: she's got a hell of a voice. Surrounded by a trio of grizzly dudes whose day jobs are more than likely far removed from the glittery, girl group-indebted synth-stomp of Night Time, My Time, Ms. Ferreira presented a commanding presence on stage. While the music itself -- driven by thudding synth bass and high-hat driven beats -- is easy enough to swallow, it does little to hide the fact that Ferreira is really the show. And, as such, it grew easier and easier to see why her (pop) star has steadily grown over the last few years. Certain technical issues broke the rhythm of her set, but even so watching her shout to the sound crew from behind big black sunglasses seemed consistent with its overall vibe. "Everything Is Embarrassing" inspired dancing among the assembled masses.

The Hold Steady were our key picks for Saturday's festivities, and we're very happy to report that they did rock most steadfastly. Our scrawled notes excitedly shout from the page something to the effect of Craig Finn being the consummate indie rock frontman. Much like, say, Guided By Voices' Robert Pollard, Mr. Finn pulls plenty of rock star stage moves, as they have been handed down generation to generation from Elvis to Iggy and so on. This included plenty of nerdy off-mic ad-libbing and over-animated expressions to go along with Finn's prowling, strutting and mic stand twirls. The Hold Steady tour with two additional guitar players these days that trade lead and rhythm duties, which render Finn's guitar-based contributions (or more accurately, lack thereof) all the more comical. Songs in which he elects to sling on the ol' axe were seemingly chosen at random, but, hey, we aren't roadies, so what do we know? When minded at all, his guitar would typically only receive attention for a verse or two before Finn shoved it aside to make with the dancing. The Hold Steady's set itself was a briskly paced tour de force of rock 'n' roll, and drew tunes from nearly its entire catalog. It was a crowd-pleaser to be sure, cramming in 14 songs in just about an hour.